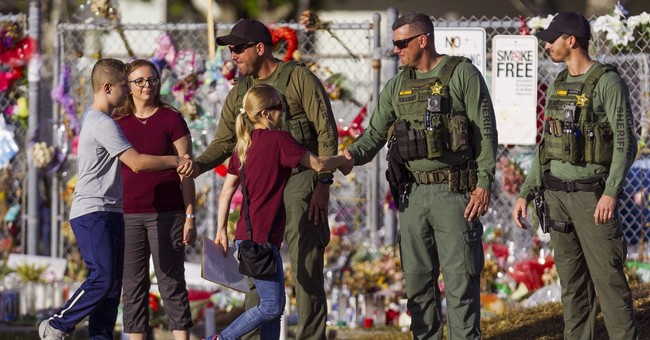 Folks, I have all the respect in the world for law enforcement, but this is getting absurd down in Broward County. We have a local police outfit that could have acted on the many red flags raised by shooter Nikolas Cruz, who killed 17 people at Marjory Stoneman Douglas High School on February 14. Police visited his house more than 30 times, with reports that Cruz had pointed guns at people. Then, on the day of the shooting, former Sheriff’s Deputy Scot Peterson failed to engage Cruz. Peterson, who served as the school’s resource officer, resigned rather than be placed on unpaid suspension. He’s been pilloried as a coward for failing to enter the building when Cruz started to open fire on students and faculty.

As the country mourns the victims, there are many debates about new gun laws and government incompetence. In all, at the state, local, and federal level, it was a total and complete collapse of enforcement. There was certainly more than enough opportunities for authorities to commit Cruz, who exhibited disturbing violent behavior. A school official and Peterson recommended commitment for Cruz, which under the state’s Baker Act would have all but prevented him from buying firearms. His commitment would have been flagged on a background check. This recommendation was put forward in 2016 when Cruz cut himself reportedly over the breakup of his girlfriend--nothing happened.

The @browardsheriff announced Dep. Moises Carotti was asleep in his patrol car near Marjory Stoneman Douglas Monday. He was to cover the north side of building 1200, the building the alleged gunman entered on Valentine's Day when 17 were killed. Dep. has been suspended. @WPTV

Now, as the community comes together and moves on in the best way they can, we have another trip up from the Broward County Sheriff’s Office: they suspended another deputy who was sleeping in his patrol car near Marjory Stoneman. He was assigned to a security shift at the school (via Miami Herald):

A Broward Sheriff’s deputy was suspended Tuesday for sleeping in his patrol vehicle — which was parked next to the Marjory Stoneman Douglas High School building where 17 students were shot and killed just over a month ago.

BSO Deputy Moises Carotti, suspended with pay at least until an internal affairs investigation is completed, was found asleep after a student at the Parkland school notified another officer, the Broward Sheriff’s Office said Tuesday. He had been assigned to a security shift at the school.

“The sergeant responded to the marked patrol vehicle, which was parked on the Northwest corner of the 1200 building,” BSO wrote in a press release Tuesday. “He knocked on the window to get Carotti’s attention, who appeared to be sleeping.”

Oh, and to boot, two other students were arrested for bringing knives to school, with another being evaluated after making threats online, according to the Sun Sentinel:

Jordan Salter, 18, was arrested Tuesday morning after a disagreement in the cafeteria with another student who asked her friend a sexually offensive question. Salter poured her cereal on the boy’s head and pulled a two-inch black knife from her bra, according to a report from the Broward Sheriff’s Office.

Another student, Gavin Stricker, 17, came to the attention of school authorities Tuesday afternoon after it was reported he had brandished a knife on a bus Monday. He was called into the school’s office and a 9-inch knife was found in his backpack, according to a juvenile arrest report.

A sophomore was hospitalized for a mental-health evaluation after screenshots of his Snapchat social media account showing him posing with a gun in his waistband circulated around campus Tuesday morning. He had also posted an image of bullets on Snapchat. The photos were captioned with “catch me out here ni**a” and one referenced a student named Josh, the sheriff’s office said.

The student told a detective that the firearm in the photo was a BB gun and the bullets belonged to his father, according to a sheriff’s office report.