School Officials, Sheriff's Deputy Wanted FL Shooter To Be Committed In 2016. No One Acted On It 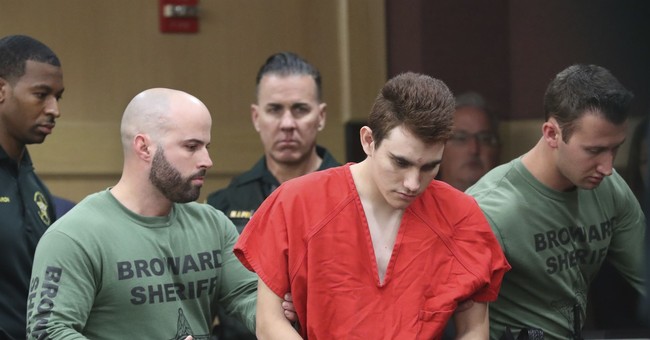 So, is this a case of lax gun laws or failure to enforce existing ones? Concerning the tragic shooting at Marjory Stoneman Douglas High School in Parkland, Florida, which left 17 people dead, there has been a call for new gun laws. Gov. Rick Scott recently signed legislation that increases the age to buy long guns to 21, provides more mental health programs to schools, establishes a tip line to report threats, and allows school districts to approve employees carrying concealed firearms on campus. Most of the bill is fine, but the age limit increase is grossly unconstitutional. The National Rifle Association has filed a lawsuit over the provision. Even President Donald Trump has considered raising the age limit at the federal level. Yet, state, local, and federal officials failed to act upon the red flags presented by shooter Nikolas Cruz. The local police visited the Cruz home over 30 times, with reports that Cruz has pointed guns at people. The FBI has two serious tips about Cruz and didn’t even forward them to their Miami office. Cruz could have been involuntarily committed for mental evaluation after he reportedly cut himself upon a breakup with his girlfriend in 2016.

Through the Baker Act, this commitment would have shown up on a background check, which could have prevented him from buying the AR-15 he used to commit this terrible act three days after he was expelled in February of 2017. The Associated Press has documentation that Cruz was recommended to be committed by former school resource officer Scot Peterson, who resigned after footage showed him not confronting Cruz on the day of the shooting, February 14—and by school officials. No one acted on it (via AP) [emphasis mine]

Officials were so concerned about the mental stability of the student accused of last month’s Florida school massacre that they decided he should be forcibly committed.

But the recommendation was never acted upon.

A commitment under the law would have made it more difficult if not impossible for Nikolas Cruz to obtain a gun legally.

Cruz is accused of the shooting rampage that killed 14 students and three school employees at Marjory Stoneman Douglas High School in Parkland on Feb. 14. In addition, 17 people were wounded.

But more than a year earlier, documents in the criminal case against Nikolas Cruz and obtained by The Associated Press show school officials and a sheriff’s deputy recommended in September 2016 that Cruz be involuntarily committed for a mental evaluation.

The documents, which are part of Cruz’s criminal case in the shooting, show that he had written the word “kill” in a notebook, told a classmate that he wanted to buy a gun and use it, and had cut his arm supposedly in anger because he had broken up with a girlfriend. He also told another student he had drunk gasoline and was throwing up. Calls had even been made to the FBI about the possibility of Cruz using a gun at school.

The documents were provided by a psychological assessment service initiated by Cruz’s mother called Henderson Behavioral Health. The documents show a high school resource officer who was also a sheriff’s deputy and two school counselors recommended in September 2016 that Cruz be committed for mental evaluation under Florida’s Baker Act. That law allows for involuntary commitment for mental health examination for at least three days.

It’s all part of a pattern of stories that showed that authorities had the ability to arrest Cruz, confiscate his firearms, and prevent this tragedy (via Miami Herald):

Nikolas Cruz threatened classmates, posted photos of himself holding guns, made violent statements online and was repeatedly described to authorities as a potential “school shooter.”

His troubling behavior gave law enforcement plenty of opportunities to investigate and arrest him — and even take away his guns — long before he shot up Marjory Stoneman Douglas High School in Parkland last week, according to interviews with former South Florida prosecutors and legal experts.

In recent years, South Florida police detectives have arrested a slew of young men in unrelated cases who exhibited similar, troubling behavior on a variety of charges. Cops took them seriously.

It never happened with Cruz.

The school’s policy that stressed leniency over discipline that could land students with criminal records for felonious acts is also being cited as a policy, one that was enacted under the Obama administration, which prevented measures that could have stopped Cruz from purchasing firearms.

So, what this suggests is that if the laws were enforced, this could have been prevented. It wasn’t because of the NRA, or the expiration of the assault weapons ban in Clinton’s 1994 crime bill, or the age to buy long guns being too low. It was that government abjectly failed to protect the people.

Mask Insanity: What Two White Women Said to a Black Man on an Elevator Is Peak Liberalism
Townhall
Carrie Lukas shares INFURIATING story about Fairfax County Public Schools bringing in the POLICE to deal with her and her 2 unmasked children
Twitchy
Tensions Boil Over in the Biden Administration After Ron Klain Is Thrown Under the Bus
Redstate
Insanity Wrap: Neil Young Tells Spotify to Dump Joe Rogan — or Else!
PJ Media