Disgraced Officer Who Stood By During Florida Shooting: I'm Not A Coward 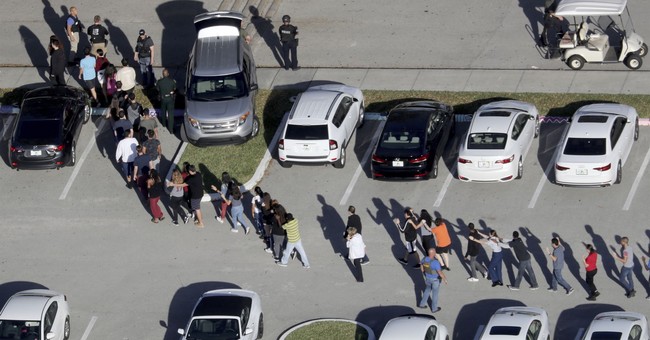 On February 14, Nikolas Cruz shot and killed 17 people at Marjory Stoneman Douglas High School in Parkland, Florida. There were many opportunities for local, state, and federal authorities to prevent this tragedy. They decided to either punt on helping this disturbed person or did absolutely nothing. What’s even more outrageous is the report that deputies from Broward County Sheriff’s Office did not engage the shooter during his rampage. The shooting lasted six minutes, the resource officer on duty, Officer Scot Peterson, decided to not engage Cruz. Sheriff Steve Israel said the footage of Peterson just standing there made him “sick to his stomach.” It launched an internal investigation. Facing suspension without pay, Peterson resigned. Yet, there’s this CNN report from Jake Tapper that says Coral Spring Police Department said three more Broward County deputies didn’t engage Cruz either:

Not surprised it took him several days to respond to the attacks against him. https://t.co/GVKuymEbog

When Coral Springs police officers arrived at Marjory Stoneman Douglas High School in Parkland, Florida, on February 14 in the midst of the school shooting crisis, many officers were surprised to find not only that Broward County Sheriff's Deputy Scot Peterson, the armed school resource officer, had not entered the building, but that three other Broward County Sheriff's deputies were also outside the school and had not entered, Coral Springs sources tell CNN. The deputies had their pistols drawn and were behind their vehicles, the sources said, and not one of them had gone into the school.

Some Coral Springs police were stunned and upset that the four original Broward County Sheriff's deputies who were first on the scene did not appear to join them as they entered the school, Coral Springs sources tell CNN.

Now, Peterson’s lawyer is saying that he’s not a coward, a statement that did not sit well with some of the families of the victims. One, Fred Guttenberg, who threw some harsh words at Sen. Marco Rubio (R-FL), was equally critical of former Officer Peterson. “I'm sorry, I'm not feeling sympathy for you,” he said (via NBC News):

The sheriff's deputy blamed for failing to enter a Florida high school while 17 people were killed said Monday that he's been unfairly labeled a coward and that he did nothing wrong.

Peterson's lawyer, Joseph DiRuzzo III, said in a statement Monday that Israel had rushed to judge his client without taking into consideration all the facts.

"Let there be no mistake, Mr. Peterson wishes that he could have prevented the untimely passing of the seventeen victims on that day, and his heart goes out to the families of the victims in their time of need," DiRuzzo said.

"However, the allegations that Mr. Peterson was a coward and that his performance, under the circumstances, failed to meet the standards of police officers are patently untrue. Mr. Peterson is confident that his actions on that day were appropriate under the circumstances and that the video (together with the eye-witness testimony of those on the scene) will exonerate him of any sub-par performance," the statement said.

Well, let’s just say some other sheriff’s departments are letting their policy be known in such situations. In Denton County, Texas, Sheriff Tracy Murphee wrote in a letter, “All commissioned deputies if you respond to an active shooter you are expected to take immediate action. We do not stage and wait for SWAT, we do not take cover in a parking lot, and we do not wait for another agency. We go in and do our duty. We go in to engage and stop the shooter and save lives.”

Sheriff Israel also said that Peterson should have entered the building to engage Cruz.