'He Never Went In': The School Resource Officer Failed To Engage Florida Shooter 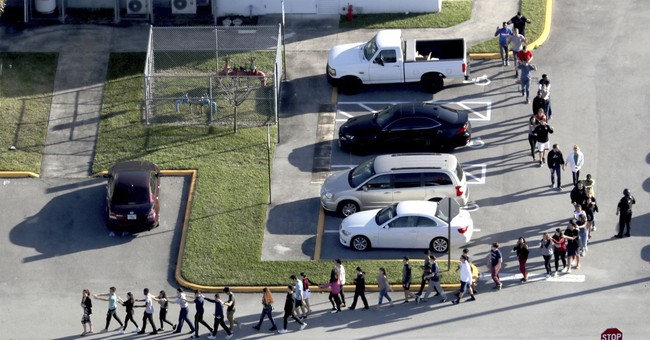 Fresh off of being featured on a CNN town hall about school shootings, which was really a two-hour television event for anti-gun liberals to bash the National Rifle Association, Broward County Sheriff revealed a disturbing development in the investigation.

The school resource officer failed to immediately engage shooter Nikolas Cruz at Marjory Stoneman Douglas High School last Wednesday. It’s part of an ongoing list of failures that don’t stop with local law enforcement. The FBI was warned on January 5 about Cruz and did nothing to follow up on it. FBI Director Chris Wray apologized that protocols were not followed in this matter.

Upon viewing the video footage, the officer in question, Scot Peterson, waited four minutes outside the building. The shooting lasted six minutes. Seventeen people were killed and at least a dozen more were injured. Sheriff Scott Israel said he’s “sick to his stomach” Mr. Peterson never went into the building (via Miami Herald) [emphasis mine]

On Thursday, Israel focused much of his press conference on the school resource officer stationed at the campus, Scot Peterson, who chose to resign after he was suspended without pay. Peterson’s decision was made after investigators reviewed surveillance footage of the Parkland shooting.

“I am devastated,” Israel said. “Sick to my stomach. He never went in.”

According to Israel, Peterson remained outside Building 12 for about four minutes. The shooting lasted about six minutes, he said. When the shooting began the deputy was inside the school handling a matter with a female student.

A review of surveillance video showed that the deputy was in position and armed but never entered the building. He remained stationed outside the building while the shooting went on.

The armed school resource officer at Marjorie Stoneman Douglas High School responded to the shooting BUT NEVER WENT IN for “upward or 4 minutes” while the gunmen killed people, said Sheriff Scott Israel.

What should Peterson have done

As noted above, school resource officer Scott Peterson quit when an investigation was opened up into his conduct. Sheriff Israel said video and witnesses show that Peterson was outside the SE corner of the building and "clearly" could her gunshots.

Could he hear the screams?

Peterson has now resigned in light of this development.

Incompetence at every level of this guy’s department but CNN got their show trial to take it out on people who had zero to do with it.