Communism Will Never Win: North Korean Defector Honored By President Trump At State of the Union 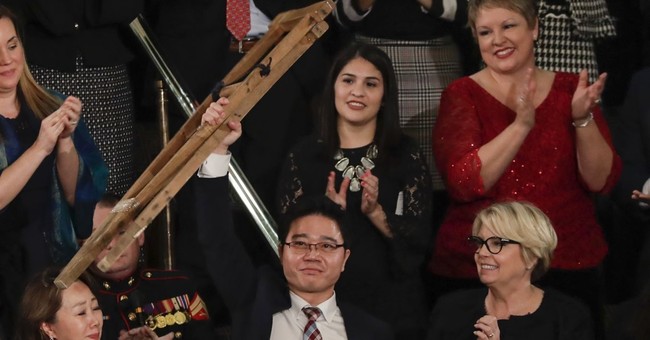 Despite what many liberals are saying about last night’s State of the Union address by President Donald J. Trump, there were many powerful moments. One of which was when the president detailed the story of North Korean defector Ji Seong-ho, who traveled thousands of miles to find freedom. Prior to that, he collapsed on a railroad due to hunger, where he awoke when a train ran over his legs. As Trump told his story, it was not without tragedy. His father tried to escape to freedom, only to be captured and tortured to death. Now, Ji Seong-ho lives in the South Korean capital of Seoul, helping other defectors escape the communist hellhole that is North Korea (via WaPo):

In 1996, he was a teenager, and North Korea was in the grip of a devastating famine that forced Ji and his siblings to eat grass and rats. Ji was trying to steal a few pieces of coal from a train so he could barter it for food, but he passed out from hunger and was hit by a train. He survived but had to have his left arm and his left leg amputated — without anesthesia — as a result. Life got even tougher for him.

But a decade later, he managed to escape, making the journey across the Tumen River into China and eventually all the way down to the south of the country and across into Laos and then Thailand. From there, he was sent to South Korea — and was fitted with a prosthetic arm and leg.

Today, he runs a group called Now Action and Unity for Human Rights, helping other North Koreans to escape from the regime.

“Every step of the escape is hard and dangerous — hiking mountains, changing methods of transportation and crossing borders,” Ji said when two Washington Post reporters accompanied him on a rescue mission to Thailand. “Because they’re so tense, some fall ill during or after the escape.”

That scene of a now free North Korean defector, hoisting his crutches in defiance of the evil regime there, is one of the more powerful State of the Union moments I've witnessed.

Here is the portion where he's mentioned and honored by President Trump (via White House):

…we are joined by one more witness to the ominous nature of this regime.  His name is Mr. Ji Seong-ho.

In 1996, Seong-ho was a starving boy in North Korea.  One day, he tried to steal coal from a railroad car to barter for a few scraps of food.  In the process, he passed out on the train tracks, exhausted from hunger.  He woke up as a train ran over his limbs.  He then endured multiple amputations without anything to dull the pain.  His brother and sister gave what little food they had to help him recover and ate dirt themselves — permanently stunting their own growth.  Later, he was tortured by North Korean authorities after returning from a brief visit to China.  His tormentors wanted to know if he had met any Christians.  He had — and he resolved to be free.

Seong-ho traveled thousands of miles on crutches across China and Southeast Asia to freedom.  Most of his family followed.  His father was caught trying to escape, and was tortured to death.

Today he lives in Seoul, where he rescues other defectors, and broadcasts into North Korea what the regime fears the most -- the truth.

Today he has a new leg, but Seong-ho, I understand you still keep those crutches as a reminder of how far you have come.  Your great sacrifice is an inspiration to us all.

Seong-ho’s story is a testament to the yearning of every human soul to live in freedom.

It was that same yearning for freedom that nearly 250 years ago gave birth to a special place called America.

Ji Seong-ho then raised his crutches in defiance of his oppressors. Communism will never win.