Smeared: Nikki Haley And The Totally Unsubstantiated Allegation That She's Having An Affair With Trump 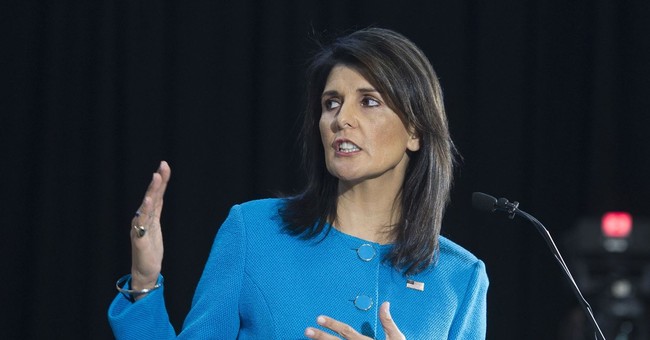 Well, if you’ve lost interest in Michael Wolff’s error-ridden book, Fire and Fury: Inside The Trump White House, he’s accused UN Ambassador Nikki Haley of having an affair with President Donald Trump. Yeah, par for the course for a book that’s been pilloried by the press as not being a journalistic project and loaded with inaccuracies, but this has been met with bipartisan disgust, even from those who would never be fans of Donald Trump. First, his rumor began when the author, Michael Wolff, went on Bill Maher’s Real Time On January 19 (via Daily Beast) [Warning: strong language]:

Well, you have done the impossible, you’ve made America read again,” Maher told Wolff at the top of their interview. Since Wolff has done so many TV appearances over the past few weeks, Maher asked him for one detail from the book that he’s surprised no one has picked up on yet.

Instead of telling Maher about something that he did put in the book, Wolff slyly teased a White House anecdote that he apparently didn’t feel comfortable including. There was one story about Trump that he kept hearing, but couldn’t confirm, even by his questionable standards.

“I didn’t have the blue dress,” Wolff said, referring to the evidence that damned Bill Clinton during the Monica Lewinsky scandal.

“Yes,” Wolff replied, but he refused to elaborate. “You just have to read between the lines,” he said, adding, “Now that I’ve told you, when you hit that paragraph, you’ll say bingo.”

It's abhorrent and quite frankly after his visit to @TheView I have no clue in hell why the mainstream media is giving him or his book any credence whatsoever. It's pathetic. https://t.co/ah0VCeOQlK

Haley was the one drawn into this unsubstantiated and baseless accusation. Sadly, this isn’t her first rodeo with such horrific attacks on her character; they were hurled at her when she ran for governor of South Carolina. Politico’s Eliana Johnson touched this upon last week, where she strongly denounced the accusation:

“It is absolutely not true,” Haley said, arguing that Wolff not only has his facts wrong, but that his insinuation is similar to other attacks that she and other successful women have faced when they've been forced to swat down suggestions they've slept their way to the top.

“I have literally been on Air Force One once and there were several people in the room when I was there,” she said in an interview Thursday for POLITICO’s Women Rule podcast, referring to a flight from Washington to Long Island in late July. “He says that I’ve been talking a lot with the president in the Oval about my political future. I’ve never talked once to the president about my future and I am never alone with him.”

“So the idea that these things come out, that’s a problem,” she said. “But it goes to a bigger issue that we need to always be conscious of: At every point in my life, I’ve noticed that if you speak your mind and you’re strong about it and you say what you believe, there is a small percentage of people that resent that and the way they deal with it is to try and throw arrows, lies or not.” Wolff did not respond to a request for comment.

Asked about the women who have accused the president of sexual harassment, she told CBS News last month, “women should always feel comfortable coming forward and we should all be willing to listen to them.”

Haley maintains she has suffered little blowback for these comments and said that, after her CBS appearance, the president called her and “said I did a good job.”

It's that sort of fearlessness, in Haley's telling, that has made her subject to a slew of salacious rumors intended to ruin her career. She was plagued by accusations of an extramarital relationship during her campaign for South Carolina governor and in her early governorship, something she dismisses as the product of resentment from a small minority of men who have it out for strong women.

“I saw this as a legislator. I saw this when I was governor. I see it now. I see them do it to other women,” she said. “And the thing is, when women work, they prioritize, they focus, and they believe if you’re gonna to something, do it right.”

“Others see that as either too ambitious or stepping out of line. And the truth is, we need to continue to do our job and if that means they consider it stepping out of line, fine. And if that means they’re gonna throw stones, people see lies for what it is. Do I like it? No. Is it right? No. Is it gonna slow me down? Not at all. Every time this has happened, it only makes me fight harder. And I do it for the sake of other women that are behind me because they should never think that they have to put their head down and cower out of fear that somebody’s gonna do something to you.”

Republican strategist Alice Stewart and The Daily Beast’s Erin Gloria Ryan spoke about the Haley allegations with CNN’s Kirsten Powers last Friday on State of America, where there was agreement that this rumor is total trash. There’s no evidence, and that sexism is sexism—regardless of political affiliation.

About that Nikki Haley rumor....

“This story itself strikes me, as a feminist as really, really sexist and terrible. It's awful that Nikki Haley has to take time out of her day, take time out of her job, to address these allegations, which were just kind of thrown out with no real evidence, with a writer of a book who has kind of a questionable past history and relationship with the truth,” said Gloria. The Daily Beast editor also said her extramarital affair allegations while serving as governor was based on zero evidence, just noise from her political enemies.

While it’s nice to see some feminists being appalled by this story, the cynical side of me suggests liberal women won’t lift a finger to trash Wolff and other for peddling this garbage. For the anti-Trump Left, it’s damn him and whoever works for him. It’ll circle to Trump’s allegations of sexual misconduct, leaving Haley’s baseless smear as the staging ground to launch another attack on the president. It won’t be given the rightful repudiation it deserves.