As Media Torches Supposed Bombshell Book On Trump, Author Says Parts Of It Could Be Totally Wrong 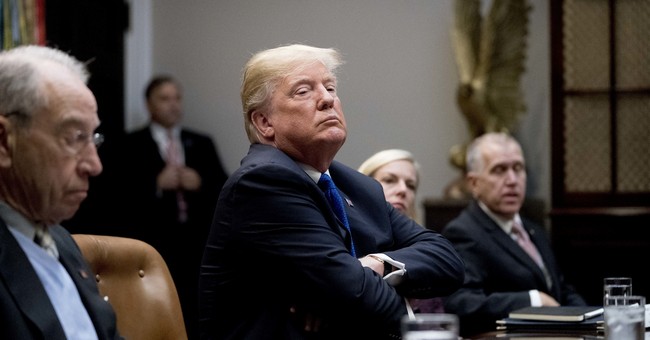 (I have never had breakfast at the Four Seasons, never actually been there) (but now I wonder if I can use this to go eat there and expense it?) pic.twitter.com/bWgVAwrEfj

This excerpt also identifies Wilbur Ross as the nominee for labor secretary, which he was not. https://t.co/vjny32ugG0

We're up to a third thing: Hilary Rosen's name is misspelled https://t.co/wIQ4lrLRwq

Well, the day has arrived. Michael Wolff’s book Fire and Fury: Inside The Trump White House has hit the bookshelves. The sales are going through the roof. It’s already number one on Amazon’s best-seller’s list, with NPR reporting that one D.C. bookstore (shocker!) sold out of their copies in 20 minutes. In a town where gossip is currency, this is pure gold, but how much of it is true. Excerpts were published in New York Magazine, where liberals took a keen interest in this passage [emphasis mine]:

Of course, Trump knew who John Boehner was; he had only tweeted about him multiple times over the years. The book details rather unflattering moments within the Trump presidency, including the notion that the 45th president didn’t think he was going to win. That also included his closest inner circle; they had already moved on to what he would do next. The Trump news network that was rumored late summer of 2016 was supposedly mulled as the next project. Trump and others knew his brand of neo-populism would carry past 2016—and then he won the election.

As liberals lick their lips over the juicy details, let’s not forget that it isn’t just the Trump White House that’s slamming this book. Former members of the Obama administration, other members of the news media, and even CNN have warned that this book is shoddy at parts. Even the author, Michael Wolff, who has described himself as a “famous bloviator,” admits that parts of his book could be untrue, even with tapes of conversations between Steve Bannon and other top Trump officials, though other interviews were off the record. Wolff even makes a note of it in his book, which Business Insider dissected. They concluded that for some portions of the book, it’s pretty much impossible to discern things, like how someone felt [emphasis mine]:

Here is the relevant part of the note, from the 10th page of the book's prologue:

The book itself, reviewed by Business Insider from a copy acquired prior to its Friday publication, is not always clear about what level of confidence the author has in any particular assertion.

Lengthy, private conversations are reported verbatim, as are difficult-to-ascertain details like what somebody was thinking or how the person felt.

Wolff attributes his book to "more than two hundred interviews" with people including Trump and "most members of his senior staff."

And then comes the reviews from his colleagues in the news media. Yes, they’ve made some whoppers. ABC News’ Brian Ross being one of the most recent reporters to step on a rake for botching the dates in a Trump-Russia story, which got him suspended for four weeks without pay. That suspension ended yesterday, though he didn’t show up for work. But even this book has members of the news media criticizing it for its sloppiness and looseness with the truth.

"I believe parts of it and then there are other parts that are factually wrong," she said on CNN. "I can see several places in the book that are wrong. So for instance, he inaccurately describes a report in the New York Times. He inaccurately characterizes a couple of incidents that took place early on in the administration. He gets basic details wrong."

Haberman said Wolff's "style" is to create a broad narrative in a story, but gets many of the details wrong.

"He creates a narrative that is notionally true, conceptually true, the details are often wrong," she said.

Haberman said Trump is also incorrect when he says he never met with Wolff, but she also said that Wolff is "overstating the access he had to the president" to write the book.

CNN’s Alisyn Camerota warned viewers that this book isn’t journalism, citing his prologue (via The Hill):

"We should mention that it sounds like Michael Wolff's modus operandi was to let the people he interviewed spin yarns," the "New Day" co-host said, said regarding "Fire and Fury."

"This isn't really journalism. This is a very interesting read but in terms of the way he processed them, he admits in the author's note that he let people tell their own stories and he printed them," she concluded.

Note to Trump: You have to truly be an idiot to cooperate in any way with Michael Wolff, widely agreed to be a total sleaze bag.

Bannon may well have said all that stuff but let's remember that Wolff is an unprincipled writer of fiction. https://t.co/UfRzFnIGox

Axios’ Mike Allen and Jim Vanehei wrote, “There are definitely parts of Michael Wolff's "Fire and Fury" that are wrong, sloppy, or betray off-the-record confidence.” Steve Rattner, who headed President Obama’s task force for the auto bailout, called Wolff a “total sleaze bag” and an “unprincipled fiction writer.” Left wing Salon also admitted that the book is not “super reliable,” though they added it’s too juicy to pass up. In all, it’ll probably add the self-righteousness and insufferable smugness that veteran reporters Woodward and Bernstein mentioned this week. In the meantime, if you want to buy it, go for it—just know that there’s some fake news mixed in it.