FBI Deputy Director McCabe Forced To Step Down, But Not Leaving The Bureau Just Yet 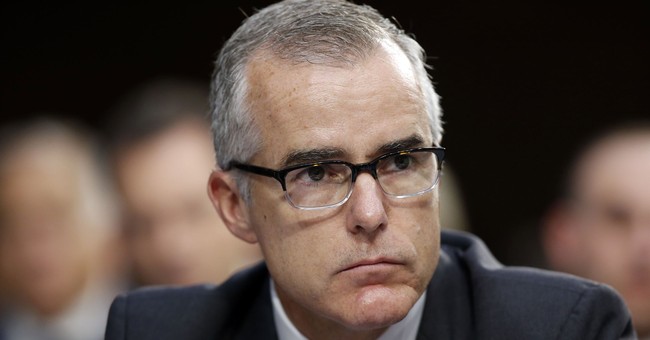 As we await a possible vote from the House Intelligence Committee on the release of the memo that details possible FISA abuses, there’s some news from the FBI: Deputy Director Andrew McCabe is stepping down (via NBC News):

McCabe will remain on the FBI payroll until he is eligible to retire with full benefits in mid-March, the sources said.

One source familiar said McCabe was exercising his retirement eligibility and characterized McCabe’s decision as "stepping aside."

McCabe has been at the center of ongoing tensions between the White House and the FBI and has reportedly been under pressure to quit from President Donald Trump, whose campaign is being investigated for possible collusion with Russia.

NBC News: Multiple U.S. officials say that FBI Deputy Director Andrew McCabe is stepping down from his post today and taking "terminal leave" meaning that he will stay on until his retirement in March (that was always his plan) so he can receive full retirement benefits.

In December, it was announced that McCabe would retire in March, the point at which he would be able to collect his government pension. Sources told CBS News that the deputy director was forced from his post, but he won’t be leaving just yet. He’s reportedly remaining at the FBI under “terminal leave” until March—his projected departure date.

McCabe has been at the center of intense FBI scrutiny over his reference to a text message by FBI agent Peter Strzok, who was a top counterintelligence agent who was involved in the Hillary email probe and signed off on the bureau’s counterintelligence probe into whether the Trump campaign colluded with Russia in July of 2016. He also sent tens of thousands of texts to FBI lawyer Lisa Page, with whom he was having an affair—a great many anti-Trump and pro-Hillary Clinton. In one text, dated on August 15, 2016, Strzok mentioned an “insurance policy” regarding a possible Trump victory in 2016. It read:

I want to believe the path you threw out for consideration in Andy’s office — that there’s no way [Trump] gets elected — but I’m afraid we can’t take that risk,” FBI counterintelligence official Peter Strzok wrote in a cryptic text message to Lisa Page, an FBI lawyer and his mistress.

Some have alleged that it’s a reference to the largely unverified and unsubstantiated Trump dossier, which has been accused of being the basis of securing FISA warrants against members of the Trump team. The FBI and DOJ has largely stonewalled the investigative committees regarding more clarification on the dossier, which is really an opposition research document against Trump funded by Democrats and contracted out by Fusion GPS. Prior to Christmas, McCabe’s seven-hour testimony didn’t make anything clearer, with the House Intelligence Committee mulling additional subpoenas after some aspects didn’t line up.

Sequence of events so far:
-Nunes memo is sent to the FBI for review
-Top FBI official seemingly leaks the memo to the NYT and other MSM outlets
-FBI Dep Dir McCabe resigns
Coincidence?
??https://t.co/vUaZl82VJt

Strzok was reassigned to human resources once Special Counsel Robert Mueller, who is now leading the DOJ’s Russia probe, found out about the texts in August of 2017. The delay is another question entirely, but palace intrigue abounds as the timing of this forced removal coincides with FBI Director Wray reviewing the FISA memo over the weekend.