Yeah, The Trump Dossier Could Be The FBI's 'Insurance' Plan 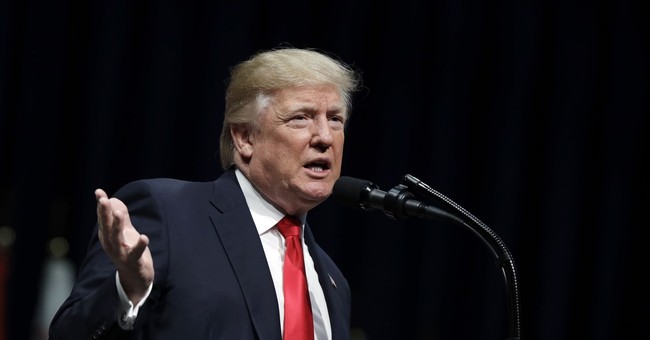 Before Christmas, The Wall Street Journal reported that the FBI “insurance” policy that’s been referenced pervasively by FBI agent Peter Strzok was referring to the bureau’s Russia probe, but it was more in reference to the fact that the FBI “needed to aggressively investigate allegations of collusion between Donald Trump’s campaign and Russia, according to people familiar with his account. The agent didn’t intend to suggest a secret plan to harm the candidate.” It was surely met with skepticism.

The FBI has been engulfed in controversy after Strzok’s text with FBI lawyer—and mistress—Lisa Page was revealed. Strzok was a key counterintelligence agent before being dismissed from the investigation into possible collusion between the Trump campaign and Russia after these texts, there are 10,000 of them between August 15, 2015-December 1, 2016, came to the attention of Special Counsel Robert Mueller; this all occurred last summer. He was involved in the Hillary Clinton probe regarding whether the former first lady had mishandled classified information while serving as secretary of state. He also signed off on the FBI’s investigation into possible Russian ties between the Trump campaign and Russia in July of 2016. The text referring to an insurance policy in which he said, “I want to believe the path you threw out for consideration in Andy’s office—that there’s no way he gets elected—but I’m afraid we can’t take that risk. It’s like an insurance policy in the unlikely event you die before you’re 40,” was sent in August of 2016. It very well could be a reference to the probe, but National Review’s Andrew McCarthy did a deep dive asking if the “insurance” plan actually meant the unverified Trump dossier, which was compiled by former MI6 operative Christopher Steele. Fusion GPS subsidized this operation after receiving money from Hillary Clinton’s campaign and the Democratic Party to get dirt on Trump.

On top of these texts, you have a rather unseemly pattern of behavior from some top officials that feed into the bias narrative at the bureau. For starters, David Ohr met with the authors of the dossier. He was a top DOJ official, holding the title of deputy attorney general. He has since been demoted after this meeting was made public. To boot, his wife, Nellie, worked for Fusion in 2016. Andrew Weissmann, one of Muller’s top lieutenants, was spotted at Hillary Clinton’s election night party. Regardless of what their reporting staff has filed, the editorial board took a remarkably different take on the FBI’s actions since the Strzok’s texts were made public. They noted that there’s mounting evidence that the FBI tried to meddle in a presidential election. The image of the FBI is also made worse by their pervasive stonewalling. Kimberley Strassel of the Journal added that these antics were being done to save the FBI from embarrassment. They’re abusing secrecy powers if that’s the case. The FBI had until yesterday to turn over the unredacted transcripts of the interviews between former FBI Director James Comey’s two top aides—FBI chief of staff James Rybicki and FBI attorney Trisha Anderson—who might shed light into the activities of Strzok, Sally Yates, and former Attorney General Loretta Lynch. Sen. Ron Johnson (R-WI), chair of the Senate Homeland Security Committee, demanded these documents be turned over to congressional investigators. In typical fashion, the FBI failed to meet the deadline, or purposefully ignored it. Oh, I’m sorry—why were these two top FBI aides interviewed? Well, as it turns out, James Comey was being investigated for violated the Hatch Act with his October letter to Congress informing them the FBI would be reviewing more emails found on the laptop of Anthony Weiner, the ex-husband of top Clinton aide Huma Abedin.

Well, as we sink deeper in the FBI’s spiral of secrets, McCarthy wonders about the dossier, was it used to secure a FISA warrant against Trump adviser Carter Page? He thinks all arrows point to the dossier. While offering his reasons for why the dossier is the “insurance,” McCarthy also offers a thorough timeline of the bias within the FBI as well (via NRO):

Was it the Steele dossier that so frightened the FBI? I think so. There is a great deal of information to follow. But let’s cut to the chase: The Obama-era FBI and Justice Department had great faith in Steele because he had previously collaborated with the bureau on a big case. Plus, Steele was working on the Trump-Russia project with the wife of a top Obama Justice Department official, who was personally briefed by Steele. The upper ranks of the FBI and DOJ strongly preferred Trump’s opponent, Hillary Clinton, to the point of overlooking significant evidence of her felony misconduct, even as they turned up the heat on Trump. In sum, the FBI and DOJ were predisposed to believe the allegations in Steele’s dossier. Because of their confidence in Steele, because they were predisposed to believe his scandalous claims about Donald Trump, they made grossly inadequate efforts to verify his claims. Contrary to what I hoped would be the case, I’ve come to believe Steele’s claims were used to obtain FISA surveillance authority for an investigation of Trump.

There were layers of insulation between the Clinton campaign and Steele — the campaign and the Democratic party retained a law firm, which contracted with Fusion GPS, which in turn hired the former spy. At some point, though, perhaps early on, the FBI and DOJ learned that the dossier was actually a partisan opposition-research product. By then, they were dug in. No one, after all, would be any the wiser: Hillary would coast to victory, so Democrats would continue running the government; FISA materials are highly classified, so they’d be kept under wraps. Just as it had been with the Obama-era’s Fast and Furious and IRS scandals, any malfeasance would remain hidden.

Of course, no sensible person suspects that the FBI was plotting Trump’s assassination; the suspicion is that, motivated by partisanship and spurred by shoddy information that it failed to verify, the FBI exploited its counterintelligence powers in hopes of derailing Trump’s presidential run.

At a high level, the DOJ and FBI were in the tank for Hillary Clinton. In July 2016, shortly before Steele’s reports started floating in, the FBI and DOJ announced that no charges would be brought against Mrs. Clinton despite damning evidence that she mishandled classified information, destroyed government files, obstructed congressional investigations, and lied to investigators. The irregularities in the Clinton-emails investigation are legion: President Obama making it clear in public statements that he did not want Clinton charged; the FBI, shortly afterwards, drafting an exoneration of Clinton months before the investigation ended and central witnesses, including Clinton herself, were interviewed; investigators failing to use the grand jury to compel the production of key evidence; the DOJ restricting FBI agents in their lines of inquiry and examination of evidence; the granting of immunity to suspects who in any other case would be pressured to plead guilty and cooperate against more-culpable suspects; the distorting of criminal statutes to avoid applying them to Clinton; the sulfurous tarmac meeting between Attorney General Lynch and former President Clinton shortly before Mrs. Clinton was given a peremptory interview — right before then–FBI director Comey announced that she would not be charged. The blatant preference for Clinton over Trump smacked of politics and self-interest. Deputy FBI director McCabe’s wife had run for the Virginia state legislature as a Democrat, and her (unsuccessful) campaign was lavishly funded by groups tied to Clinton insider Terry McAuliffe. Agent Strzok told FBI lawyer Page that Trump was an “idiot” and that “Hillary should win 100 million to 0.” Page agreed that Trump was “a loathsome human.” A Clinton win would likely mean Lynch — originally raised to prominence when President Bill Clinton appointed her to a coveted U.S. attorney slot — would remain attorney general. Yates would be waiting in the wings.

In McCarthy’s lengthy piece, he explains why Steele was trusted, as he’s worked with the FBI before. His firm was hired to investigate corruption at FIFA in 2010, which led to the Obama-led DOJ filing a slew of charges against its officials. Read the whole piece and make up your own conclusions because there is a lot of information that we just don’t know yet. What we do know is that what is corroborated in the dossier could have been easily pieced together. As for allegations of collusion in the dossier proper, we don’t know. The FBI won’t say. That was taken from Deputy Director Andrew McCabe’s testimony to Congress last week, where he only said that the bureau corroborated that Carter Page went to Russia. As for who funded the dossier and the meetings Page allegedly held in Moscow, McCabe either didn’t recall or couldn’t say. The House Intelligence Committee might issue new subpoenas as a result. This part is key for three reasons that McCarthy had written about in a previous column:

There are more questions than answers still, and the FBI is dragging its feet regarding releasing such information that they have on this subject to authorized individuals investigating this matter. One thing that has been constant in this Russia clown show: there is zero evidence that the Trump campaign colluded with the Russians to tilt the 2016 election. Zero.