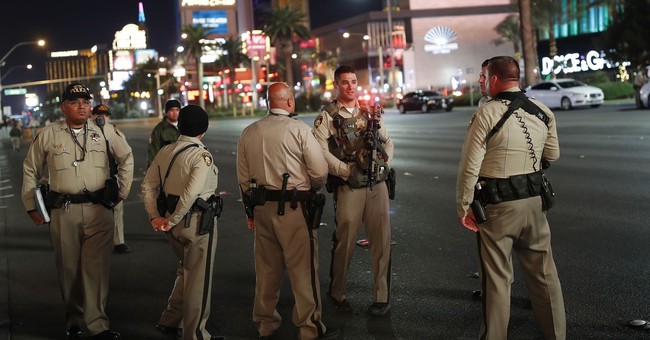 Oh, what the hell is this? We’re about to have a titanic duel on immigration and protections for Deferred Action for Childhood Arrivals recipients. We recently had to endure a shoddy and sloppy three-day government shutdown triggered by Congressional Democrats over this issue, which yielded them nothing; the GOP already agreed to fund their initiatives (i.e. Children’s Health Insurance Program) and take up DACA. Democrats learned that shutting down the government for illegal aliens is not popular. Putting the interests of illegal aliens over American citizens isn’t good either. You know what’s also bad, talking about mass shootings through the progressive lens of toxic masculinity and other issues that give left wing whack jobs the appearance of credibility in higher education, as well as a job.

Yeah, Politico decided to run this op-ed, which says that toxic masculinity and men should be blamed for mass shootings. Not only that but the writer places doubt about the mental illness angle of this debate:

...as we begin a new year, it’s time to have a more nuanced discussion about what might really be to blame for the trend of mass shootings in America—as well as the gun violence epidemic more broadly. No, it isn’t mental illness. It’s gender. If we want to stop the problem of mass shootings, we need to fix the problem of toxic masculinity.

If you take time to dig into the research, you’ll find that mental illness doesn’t play the role in mass shootings and other gun violence that many, especially our politicians, seem to think it does. Serious mental illness has been found to be conclusively present in a minority of mass shootings—only 14.8 percent of all of the mass shootings committed in the U.S., defined as a shooting which injures or kills four or more people, between 1966 and 2015. (Another study focusing on different data collections of generalized “mass murder” from 1949 to 2015 attributes 23 percent of those incidents to the mentally ill.) Studies have also found that those with serious mental illness are responsible for just 4 percent of the incidences of interpersonal violence and less than 1 percent of all gun-related homicides annually in the United States. Generally speaking, people with mental illness are far more likely to be victims of firearm violence than commit it.

Yet, while most mass shooters in the past 35 years have not been found to have a serious mental illness, nearly all of them do have one thing in common: their sex.

Men don’t just constitute almost all mass shooters in recent history; they are also responsible for the vast majority of gun-associated deaths in the country. Men own guns at triple the rate of women in the U.S., at 62 percent compared to 22 percent—and also commit suicide at nearly triple the rate of women. Eighty-nine percent of murder-suicides are committed by men, and most often include an unwitting female partner or ex-partner. (Murder suicides claim 1,200 American lives annually; nearly all of them are committed with a gun.) In fact, more than half of mass shootings (54 percent) are actually domestic violence incidents.

Furthermore, women live through the same experiences, from childhood abuse to stressful life events, at rates similar to or even higher than men. (One notable exception is binge drinking, which men do at double the rate of women.) Women are also up to 40 percent more likely than men to develop mental health conditions, according to a 2013 study by Oxford University. The Oxford study found women were nearly 75 percent more likely than men to have depression and around 60 percent more likely to have an anxiety disorder, while men and women were found to suffer from schizophrenia in more or less equal numbers. Given these numbers, if the propensity to commit gun violence and mass shootings were based largely on mental health or life events, then you would expect women to commit violent attacks at rates similar to, or higher than, men. And yet, women commit a very tiny fraction of these incidences.

Okay, so by now, all men are just murderers in waiting. Is that what we should glean from this? There are no solutions in this piece— just a rant about so-called toxic masculinity. What the hell is this crap? Seriously—liberals don’t know the difference between semi-automatic and automatic, but they’re going to solve the alleged mass-shooting crisis with a lecture on how men are terrible. Sorry, I say “no” to drugs.

Are women so fragile that they can’t learn to defend themselves from the hordes of toxic masculinity? No. They’re exercising their Second Amendment rights. In fact, more women are getting involved in shooting sports, gun ownership, and getting their concealed carry permits. Since 2007, the number of women obtaining concealed carry permits has spiked 270 percent. They’re quickly becoming the next frontier for the gun industry. Oh, and female participation in shooting sports has nearly 200 percent over the past two years.

Also, Jared Lee Loughner, Aaron Alexis, Adam Lanza, and James Holmes etc. these shooters weren’t mentally ill? Loughner was ruled insane and didn’t stand trial. Alexis thought a microwave machine was keeping him awake, executed by three people whose voices he heard coming from the ceiling. They were sent to follow him as well. He eventually killed 12 people at the Navy Yard in D.C. in September of 2013. Left wing magazine Mother Jones did an analysis of shooters and mental health after the 2012 Aurora shooting committed by Holmes. They found that based on the past 62 mass shooting events, the perpetrators suffered from some form of mental issue. They said it was “rampant” (via Mother Jones) [emphasis mine]:

Nearly 80 percent of the perpetrators in these 62 cases obtained their weapons legally. Acute paranoia, delusions, and depression were rampant among them,with at least 36 of the killers committing suicide on or near the scene. Seven others died in police shootouts they had little hope of surviving (a.k.a. “suicide by cop”). And according to additional research we completed recently, at least 38 of them displayed signs of possible mental health problems prior to the killings. (That data is now included in the interactive guide linked above.)

Yet, another issue with this piece is the data. Mass shootings are rare. That’s not a NRA talking point or a conservative one; it’s a fact. FiveThirtyEight crunched the numbers in the process, threw cold water on much of myths peddled by the anti-gun Left. It also said that trying to curb gun violence by only focusing on mass shootings is a recipe for bad social policy. In all, the data site said a) mass shootings are rare; b) they don’t make up the majority of gun crimes; c) the shooters are “different”; d) the vast majority of gun deaths are still suicides; and e) there are nuanced ways to tackle gun violence, but it’s not through a nonsensical lecture about toxic masculinity [emphasis mine]:

First, they’re [mass shooting] rare, and the people doing the shooting are different. The majority of gun deaths in America aren’t even homicides,let alone caused by mass shootings. Two-thirds of the more than 33,000 gun deaths that take place in the U.S. every year are suicides.

And while people who commit suicide and people who commit mass shootings bothtend to be white and male, suicide victims tend to be older. The median age of a mass shooter, according toone report, is 34, with very few over 50. Suicide, however, plagues the elderly as much as it does the middle-aged.

Second, the people killed in mass shootings are different from the majority of homicides. Most gun murder victims aremen between the ages of 15 and 34. Sixty-six percent are black. Women — of any race and any age — are far less likely to be murdered by a gun. Unless that gun is part of a mass shooting. There,50 percent of the people who die are women. And at least 54 percent of mass shootings involvedomestic or family violence— with the perpetrator shooting a current or former partner or a relative.

Thehistorical trends for different kinds of gun deaths don’t all follow the same course. While data suggests that the number of mass shootings similar to the Las Vegas eventhas gone up, particularly since 2000,2homicide rates have fallen significantly from their 1980 peakandcontinued on a generally downward trajectoryfor most of the 21st century.

Policies that reduce the number of homicides among young black men — such as programs that build trust between community members, police and at-risk youth and offer people a way out of crime — probably won’t have the same effect on suicides among elderly white men.Background checks and laws aimed at preventing a young white man with a history of domestic violence from obtaining a gun and using it in a mass shootingmight not prevent a similar shooting by an older white male with no criminal record.

If we focus on mass shootings as a means of understanding how to reduce the number of people killed by guns in this country, we’re likely to implement laws that don’t do what we want them to do— and miss opportunities to make changes that really work.

And no, that opportunity is not bashing men. Rare or not, mass shootings are tragic events. Many are preventable. Aaron Alexis’ rampage was preventable. The shooting at a church in Sutherland Springs, Texas was preventable, but if we’re talking solutions, then they won’t be found in a culturally progressive agenda that really just wants a space to vent and air its half-baked nonsense.