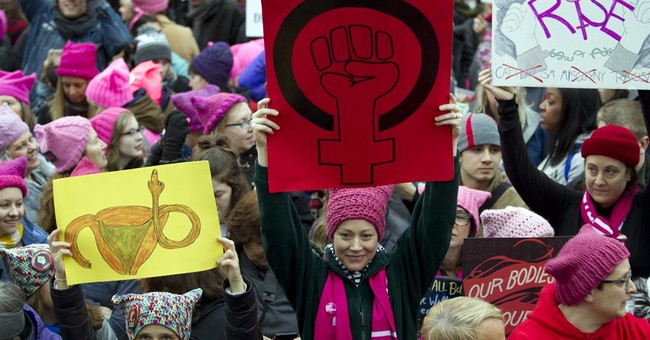 Last year, scores of protesters descended into Washington D.C. to protest the inauguration of Donald Trump. Dubbed the Women’s March, these passionate and unabashed left wing protesters donned pink hats, cutely named p***y hats—a reference to the Access Hollywood tape, where the president is heard joking with former Today show host Billy Bush, making lewd remarks about women. The hot mic moment occurred in 2005. The tape was leaked in October of 2016 and had no discernable impact on the race. Trump still won. This year, however, could spell the end of the pink p***y hats because they’re problematic. According to the social justice warriors of America, it excludes transgender and non-binary persons (whatever the hell the latter means), and women of color, whose genitals might not be pink. I’m not joking (via Washington Free Beacon):

…the Detroit Free Press reports that women activists in Michigan and elsewhere are making a conscious effort to move away from the hat out of fear that it "excludes and is offensive to transgender women and gender nonbinary people who don't have typical female genitalia and to women of color because their genitals are more likely to be brown than pink."

"I personally won't wear one because if it hurts even a few people's feelings, then I don't feel like it's unifying," said Phoebe Hopps, the founder of Women's March Michigan. "I care more about mobilizing people to the polls than wearing one hat one day of the year."

Hopps said it is not just her, and that national Women's March organizers "are not making it the cornerstone of our messaging because … there's a few things wrong with the message."

The Facebook page for the Women's March in Pensacola agreed, lecturing followers that "The Pink P*ssy Hat reinforces the notion that woman = vagina and vagina = woman, and both of these are incorrect."

LaShawn Ebly, co-chair of Black Lives Matter-Lansing, told the Free Press that she intends to make the hats the cornerstone of her speech at an upcoming rally. "I will say this one thing: It is a problem," she said by way of a preview.

Yeah, there’s something wrong, but I don’t think it has to do with the hats. At the same time, there is nothing as entertaining as left wingers eating each other.