NYT: Fusion GPS Still Investigating Trump-Russia Ties, But No One Knows Who's Paying For It 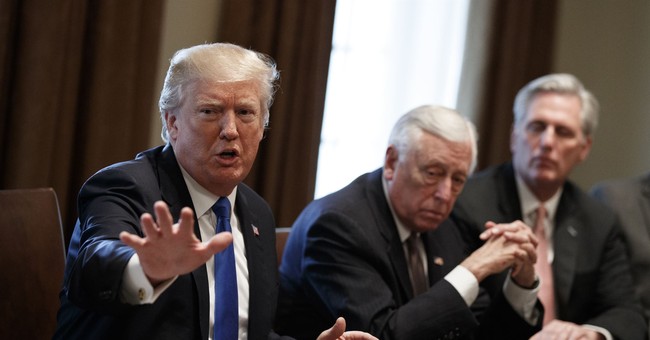 On Monday, The New York Times had a rather interesting piece about Fusion GPS’s founder, Glenn Simpson, the former journalist who is one of the key figures in the Trump-Russia investigation that has devolved into a clown show. Yet, the piece is interesting. It discussed Simpson’s life as a crack Wall Street Journal reporter, who did long, in-depth, and often costly investigative journalism for the publication. He went to Brussels for an extended stay, reporting on the financial sources of terrorism after the 9/11 attacks.

Yet, prior to that, he had reported on key stories, like the Keating Five savings and loan scandal. When Rupert Murdoch took over the paper, he saw the writing on the wall. His lengthy investigations would not longer be supported, so he left and founded Fusion GPS’ predecessor, SNS Global in 2009. You can read more about his life in Kenneth Vogel’s piece. Yet, in a more interesting twist, he also added that Fusion GPS is still investigating Trump’s ties to Russia, albeit we don’t know who’s bankrolling the rehashed venture:

Fusion GPS is STILL doing research into Trump's ties to Russia, though it's not clear who's paying for the work. https://t.co/7uA9a2ZAfG

Mr. Simpson is the man behind an explosive dossier — produced at his firm, Fusion GPS, with a former British spy, Christopher Steele — outlining possible connections between the president, his associates and Russian officials.

For months, Mr. Simpson’s name has ricocheted across the halls of Congress and the airwaves of Fox News, becoming shorthand in conservative circles for purported investigatory overreach and counterconspiracies against the White House. Questions about his research have become central to Republican attempts to discredit not just Fusion but the very existence of inquiries into Mr. Trump, including the efforts of the special counsel, Robert S. Mueller III.

Republican leaders of the Senate Judiciary Committee have asked the Justice Department to investigate whether Mr. Steele, whom Mr. Simpson hired, lied to federal authorities about his contacts with journalists.

Mr. Simpson himself has been hauled before three congressional committees for some 20 hours of questions and answers, placing him among the most significant players in the Trump-Russia affair, if math is the metric.

“Uncooperative,” Senator Charles E. Grassley, Republican of Iowa, said of Mr. Simpson’s turn before the Judiciary Committee, which he leads.

Mr. Simpson can be both of these things — according to interviews with dozens of friends, colleagues and investigative targets — and a few more: brash, obsessive, occasionally paranoid, perhaps with cause.

The name of the firm, founded in 2010, was intended to represent a “fusion” of journalism and business intelligence. The “GPS” hinted aspirationally at a global reach.

For his efforts, Mr. Simpson has been presented with a defamation lawsuit and a congressional subpoena demanding bank records, which the firm is fighting in court, saying it could jeopardize a confidential client list in an industry where privacy is paramount. A legal defense fund has been formed, one of Fusion’s lawyers, Theodore J. Boutrous Jr., said, adding that the firm’s legal costs had by now outstripped all compensation for investigations into Mr. Trump and his links to Russia during the campaign.

But the work has not stopped. Fusion continues to look into ties between Mr. Trump and Russia, according to several people briefed on the research. Mr. Simpson’s specific areas of focus, and information about any current benefactors, are closely guarded.

“Glenn’s a relentlessly digging sort of guy,” said Tim Burger, a friend and former colleague. “If there is a document out there about anything, he will find it.”

What Feinstein told me last night: "It would be helpful [if Glenn Simpson testified publicly] . ... or we should release the transcript, which I think we should do. And I think we're going to be in the process of doing it."

Things got a bit more interesting today when Sen. Dianne Feinstein (D-CA), the ranking Democrat on the Judiciary Committee, leaked the transcript of their interview with Simpson. In the transcript, Katie wrote that when asked about the Trump dossier’s sources, Mr. Simpson declined to answer, with Fusion’s lawyer, Josh Levy, saying that someone has already been killed as a result of this document being made public. Judiciary Committee Chairman Chuck Grassley (R-IA) was irate to say the least  (via Politico):

Fusion GPS co-founder Glenn Simpson, whose firm commissioned a controversial dossier alleging secret ties between President Donald Trump and the Kremlin, told congressional investigators in August that the FBI found the dossier credible because an unnamed "human source" associated with Trump had offered the bureau with corroborating information.

In a 312-page transcript of Simpson's August 2017 interview with the Senate Judiciary Committee, Simpson's attorney also said it was dangerous to discuss the dossier's sources because its public release last year had already led to murder.

Feinstein's decision to publish the dossier represents an escalation of partisan tensions that have long been simmering on the Senate Judiciary Committee. Simpson had called for the transcript of his appearance to be made public, but Republican leaders so far had not agreed to release it.

"The American people deserve the opportunity to see what he said and judge for themselves,” Feinstein, the top Democrat on the judiciary committee, said in a statement about her decision to release the Simpson transcript. “The innuendo and misinformation circulating about the transcript are part of a deeply troubling effort to undermine the investigation into potential collusion and obstruction of justice. The only way to set the record straight is to make the transcript public," she said.

"It’s totally confounding that Senator Feinstein would unilaterally release a transcript of a witness interview in the middle of an ongoing investigation – a witness that Feinstein herself subpoenaed last year for lack of cooperation," said Grassley spokesman Taylor Foy. "Feinstein’s unilateral decision was made as the committee is still trying to secure testimony from other witnesses, including Jared Kushner. Her action undermines the integrity of the committee’s oversight work and jeopardizes its ability to secure candid voluntary testimony relating to the independent recollections of future witnesses."

Republicans have criticized the dossier, saying it contains unsubstantiated and salacious charges, and have sought more information about how it might have influenced the FBI’s Trump-Russia investigation. After it was compiled by former British spy Christopher Steele, the dossier was handed over to the FBI. Later, it was published by BuzzFeed.

Fusion has also been at the center of inquires, given its ties to the Justice Department. Towards the end of 2017, it was discovered that former top DOJ official Bruce Ohr, who was an associate deputy attorney general, had met with the author of the Trump dossier and Mr. Simpson and never disclosed it; his wife, Nellie, also worked for Fusion GPS in 2016, gathering information for this document. Today, he lost his other job title, director of the Organized Crime Drug Enforcement Task Force. He apparently was part of the Obama administration’s effort to hamstring the DEA’s efforts to fight drug trafficking by Hezbollah for the sake of the Iran Deal.

This ties into texts between former FBI counterintelligence agent Peter Strzok and Lisa Page, a FBI attorney with whom Strozk was having an extramarital affair, which engulfed the FBI in controversy. Yes, the 10,000 or so texts sent between August of 2015 to December of 2016 contained pro-Hillary and anti-Trump messages. Yet, it’s the “insurance policy” that Strzok hints at in an August 15, 2016 text that caught everyone’s attention. In July of 2016, the FBI began its counterintelligence investigation into possible collusion between the Trump campaign and the Russians; Strzok signed off on that. Now, a month later, they’re discussing an “insurance” plan for a possible Trump presidency. That FBI investigation is now under the direction of Special Counsel Robert Mueller. Mueller reassigned Strzok when he found out about the texts in August of 2017.

Andrew McCarthy wrote a lengthy piece for National Review laying out why he thinks the insurance policy is the Trump dossier. Those suspicions spiked before Christmas when FBI Deputy Director Andrew McCabe refused to answer who funded the dossier and refused to elaborate on the allegations of collusion that might be in the document. The only thing he could definitively say is that Carter Page, a foreign policy adviser to Trump, went to Russia. Anything other than that about Page was a dead end. He lists three points from a previous post detailing why this is important if the supposed allegations of collusion are in the dossier:

The Wall Street Journal editorial board seems to be wondering if evidence of election meddling could be emanating from the FBI. On all fronts of this investigation, there are still more questions than answers. What is true and has remained true since this circus began is that there is zero evidence that any collusion between the Trump camp and the Russians to tilt a presidential election ever occurred—zero.