Newsweek: Israeli Flags Are Being Burned Because Of Trump 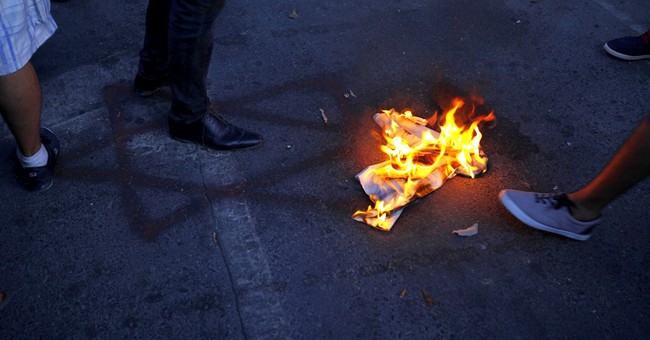 Is this a serious headline? I mean it can’t be. If it is, then it explicitly shows that liberals, especially those in my generation, have zero grasp of history. Last week, President Donald J. Trump made the official announcement that the U.S. Embassy will be moved from Tel Aviv to Jerusalem. Israel rejoiced, while the Palestinians took to the streets for three days of rage. In other words, it was a day that end in “y” over there. And as with most anti-Israeli protests, and there have other demonstrations across the world over this move by the Trump administration, their flags have been burned. One of those countries is Germany. Yet, according to Newsweek, this is all because of Donald Trump, or something:

When I read the title of that article my first thought was, that was written by a millennial, because millennials always think the world and its problems ceased to exist until they were born. I was right. https://t.co/ny0etPNgSL

Police brought charges against at least 12 people during Sunday’s protests, dubbed the Day of Rage, which took place outside the U.S. embassy in Berlin.

People were protesting Trump’s decision to recognize Jerusalem as the capital of Israel. Half of Jerusalem had been envisioned as the future capital of a Palestinian state, if a two-state solution were reached between Israel and Palestine. For many across the Middle East, Trump’s announcement on Wednesday put an end to any chance of a peace agreement by giving Israel what it wanted most without extracting any concessions.

Protests in Palestine and the Middle East over the last five days left four Palestinians dead and hundreds injured. Meanwhile, the State Department issued a safety warning for Americans traveling abroad, and the weekend saw an uptick in anti-Semitic attacks.

Three people were arrested in Sweden on Sunday for allegedly throwing firebombs at a synagogue in the city of Gothenburg. It was the second anti-Jewish attack in Sweden in just two days, and took place as people gathered to protest Trump’s Jerusalem announcement.

Yeah, sadly these horrific antics have been going for decades—and not because Trump was elected in 2016. History didn’t begin there. Anti-Semites and anti-Israeli clowns have been burning the Star of David for years. You’re kidding yourself if you think otherwise. Also, maybe we should be looking more into the people who are, you know, actually responsible for these anti-Semitic attack. It's just a thought.

- 200 Palestinians march in Malmö calling for intifada and "shoot the Jews"
- Migrants burn the Israeli flag in Stockholm.
- Jewish synagogue firebombed by masked men in Gothenburg as terrified Jews hide in the basement.

Sweden has a problem.