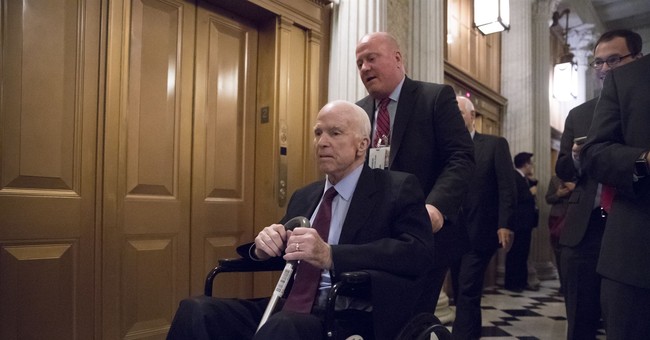 Look, folks—I know John McCain hasn’t been the most reliable Republican. He was part of the trio of Republicans who killed the so-called skinny repeal of Obamacare. That vote infuriated many on the Right, but he’s expected to be a “yea” vote for the tax reform package that’s currently making its way through the Senate. There are many ways to voice your disappointment if you’re an opponent of this legislation. Mocking the senator’s brain cancer diagnosis is not one of them. That’s what this Huffington Post reporter tweeted upon McCain’s announcement. She wrote, “congratulations to John McCain’s wife and children on their upcoming tax-free inheritance.” She later deleted the tweet, though not because it was disgusting or wrong; it just wasn’t “worth it.” you can interpret that however you like, folks.

Leave it to ex-Gawker staff to celebrate cancer and eagerly cheer someone's death, all because of politics. pic.twitter.com/u0u0vLZpF1

So this is really the hill Serious Reporters are going to die on, huh. pic.twitter.com/NIapOCyGKP

There are issues that I disagree with Sen. McCain on, but nothing good comes from mocking someone’s cancer diagnosis. You can say a lot about this tax bill, it’s not an apocalyptic event. Let’s grow up a little.

Recommended
It's Official: Texas Is Going to Become the Newest Member of a Gun Club the Liberal Media Hates
Matt Vespa
Share this on Facebook
Tweet
A Veteran Journalist Once Predicted What Would Happen to CNN If Trump Left Office
Matt Vespa
Grim Reaper: McConnell Plots the Legislative Death of the Biden Administration
Matt Vespa
Watch: CNBC Can't Believe the Disastrous Jobs Report