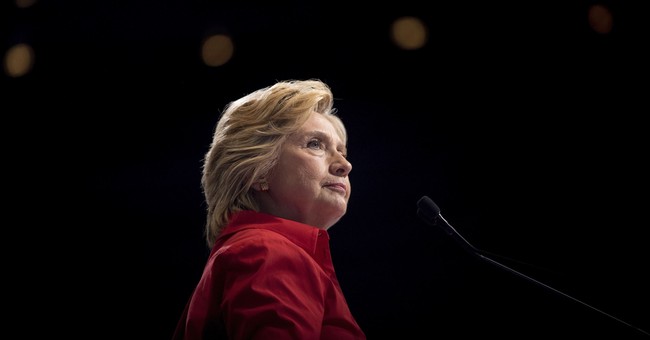 Maybe it was too much turkey; the tryptophan kicked in early or whatever, but this Salon piece is what you’d expect from a political movement who just cannot stand that Donald Trump is president. The liberal publication actually made a case for Hillary Clinton 2020. No, I’m not kidding. In short, Clinton should be considered because she won the meaningless popular vote, Trump is Hitler, it would anger trolls, and she would be a good president. Scant reasons for someone who was reportedly the most qualified person in history to be president of the United States:

This is where Clinton offers a quality that no politician in America can beat. While Republicans are trying to tar her with a bogus scandal connecting her to Russia (and anyone who believes Clinton did something wrong in the Uranium One deal lacks credibility on all matters political), the reality is that no candidate can be better described as Russia's nemesis than Clinton. Putin has always hated Clinton because of his innate sexism, which has manifested in his policies, and she certainly didn't endear herself to him by publicly criticizing Russian corruption in 2011.

Hillary Clinton being elected president (at last) would monumentally piss off misogynistic trolls, and what's not to like about that?

I can't think of a single political figure in recent American history who has been hated as deeply, or for as long, as Hillary Clinton. From the moment she emerged on the national stage in 1992 as a distinctly feminist prospective first lady, she has been the target of right-wing wrath woefully out of proportion to anything she has ever said or done. The reason for this is sexism…

By winning the popular vote convincingly in 2016, Hillary Clinton has earned the right to be considered the presumptive nominee in 2020.

As I wrote in September, Clinton is the first defeated presidential candidate to win the popular vote without being automatically considered a frontrunner in the next election. Two of the previous four popular vote-winning also-rans were actually elected in the subsequent cycle (Andrew Jackson in 1828 and Grover Cleveland in 1892), while two others were widely regarded as frontrunners before dropping out for personal reasons (Samuel Tilden and Al Gore).

Let us not forget that, for all of the smack talk about how poorly Clinton ran her campaign, she bested Trump by nearly 3 million votes…

We can expect her to be a good president.

Frankly, the worst thing that can be said about a potential 2020 Clinton candidacy, especially in America's current cultural and political climate, is that her husband still hasn't answered for the numerous sexual abuse accusations against him. While it may seem unfair for Hillary to be held accountable for Bill's alleged predations, it can plausibly be argued that she played a role in helping him cover them up. If that is ever proved beyond a reasonable doubt, she should be given the heave-ho.

Then again, Bill Clinton is also widely associated with the economic, social and foreign policy conditions of the beloved 1990s, and is greatly missed for that reason. And since few dispute that Hillary was her husband's co-president during that halcyon decade, that association can still remain a giant advantage.

Okay—some of this is a rehash. First, sexism was not a factor in the 2016 election; 53 percent of white women voted for Trump, with 62 percent of white working class women supporting The Donald. It wasn’t racism either; millions of two-time Obama voters flipped for Trump. There is nothing fishy about the Uranium One scandal? Really? She only got a 3 million-voter advantage because California is a state heavily populated by insufferable, soft liberal snobs who can’t seem to get their own fiscal house in order. Obviously, California was going into the Clinton column—and that’s the point. She ignored the Rust Belt because she somehow figured she was popular and well liked, neither of which was true. Voters viewed her as untrustworthy. Think of it this way, for all the horrors that liberals associate Trump with in the sociopolitical realm, enough voters in swing states felt he was the better option than Clinton, maybe because he articulated a better economic message, which was absent in the Clinton campaign. Also, have we totally skipped over the fact that the primaries were rigged for Clinton over progressive insurgent Sen. Bernie sanders (I-VT). A sizable chunk of the party is sore over this—they still are. And they want to close the Clinton chapter on the Democratic Party yesterday. She’s a two-time presidential loser. She couldn’t beat Barack. She couldn’t beat Trump. She has zero political skills whatsoever—and beating Rick Lazio in the 2000 New York Senate race isn’t exactly a political accomplishment. The same divisions that hobbled her in 2016 would still be there, albeit probably more intensely. Also, I think a lot of voters know that Bill and Hillary are not one and the same. If that were the case, she would have won.

Right now, as sexual harassment reckoning reverberate across the world, the Clintons are once again in the spotlight because the pass liberals and the media gave Bill on his rape allegations have some on the Left feeling that maybe they made the wrong move in the 1990s. That this was a toleration of rape culture, and that giving Slick Willy a pass allowed other men to escape accountability. Right now, Sen. Al Franken (D-MN) and Rep. John Conyers (D-MI) have had allegations of sexual misconduct lobbed against them. Franken won’t resign, and neither would Conyers. For Franken, he’s apologized, he says he’s embarrassed, and so that makes everything okay, right? He’s a liberal Democrat; they can do no wrong. Even after the horrid stories of sexual harassment that have come to light, Franken can stay because Bill Clinton did. Right now, the Left is in total disarray on what to do. They’ve lost the moral high ground. Yes, I’m sure if this re-match would occur in 2020 and the sexual harassment allegations hurled at Trump were relitigated by the Clinton camp, people would see the double standard: Bill Clinton was an accused rapist who won twice. This is a gutter fight. Period.

As for Clinton 2020, well, this is just not going to happen. Frankly, after all of this, there is one reason why this won’t happen, which I should have mentioned prior; she’s already ruled herself out. She’s done. Hillary Clinton isn’t and will never become president of the United States. That’s something to be very thankful for. Also, making trolls mad as a reason? Seriously, liberals can’t troll in the manner that’s effective. They’d get too offended if they tried and the Clintons just have too much baggage to mount a legitimate defense of the power couple. Then again, should this happen, I'm fairly confident Trump would win again, but we can't get everything for Christmas.