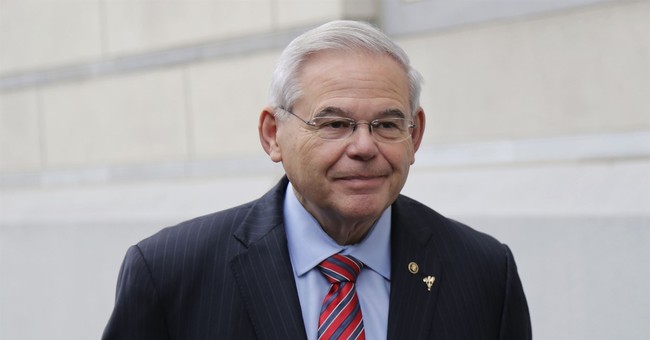 We told you how one juror in the Menendez corruption trial said she thinks he’s not guilty, and that it all could end with a hung jury. Sen. Bob Menendez (D-NJ) has been on trial for a slew of bribery and corruption charges that stem from his relationship with Dr. Salomon Melgen. Menendez is accused of using his office to help Melgen, while Melgen would offer lavish gifts to the senator, along with $700,000 in campaign contributions.  Prior to this going to the jury, Menendez’s legal team hoped Judge William H. Walls would dismiss some of the charges in mid-October. That did not happen. Now, with the jury deliberating and the trial running longer than usual, a juror with a pre-planned trip to the Bahamas has been released, but not before spilling how she felt about the whole trial. She also said that the prosecution was corrupted (via Politico):

Evelyn Arroyo-Maultsby also said other jurors’ feelings about the case are mixed and she believes the result may be a hung jury.

Arroyo-Maultsby made the comments to a few reporters outside the federal courthouse in Newark, moments after leaving the trial to begin a previously-scheduled vacation in the Bahamas. Two of the reporters shared the audio with POLITICO.

“It was very stressful,” said Arroyo-Maultsby, who, according to her Facebook page, lives in Hillside and is a revenue accounting analyst for NJ Transit. “I feel like the government was very corrupted, not that Menendez was. That they were, to me, railroading him. This is how I feel. Personally, he’s not guilty on all counts.

"I don’t think he did anything wrong,” she said.

Arroyo-Maultsby said deliberations have been tense at times.

“Everybody’s not agreeing,” she said. “Yes, there’s trouble in the jury room.”

The Bergen Record added that she said one juror is an “adamant holdout,” while three or four are leaning towards conviction. The jury won’t be deliberating since its Veterans Day. Deliberations will resume Monday.