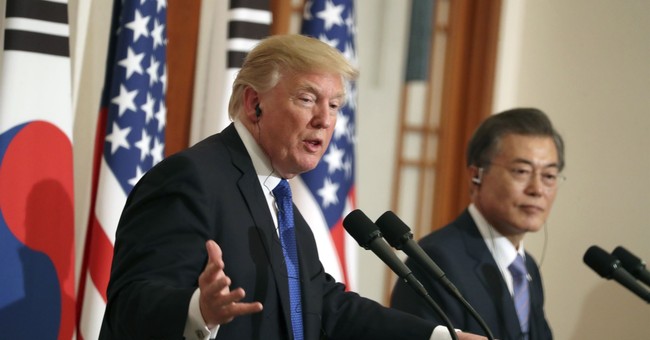 President Trump is in South Korea, which is part of his Asia trip, and NBC News decided it was appropriate to ask him about extreme vetting regarding gun purchases. The question was pitched to Trump by Ali Vitali. The question was spurred by the president demanding we have a more extensive vetting process relating to immigration in the wake of the worst terror attack to hit New York City since 9/11. Sayfullo Saipov of Uzbekistan rented a Home Depot pickup truck and ran down pedestrians and cyclists in lower Manhattan last week, killing eight people and wounding twelve. On Sunday, Devin Kelley, 26, opened fire on a church in Sutherland Springs, Texas, killing 26 people and wounding 20.

It’s angling on gun control. We all know this, but there are a few things missing. The Daily Wire picked up on this as well. First, Kelley wouldn’t have been allowed to purchases his four firearms if his domestic violence conviction was passed onto the FBI. Kelley, an Air Force veteran, was court martialed on domestic violence charges and sentenced to a year in jail. He was given a “bad-conduct discharge” in 2014. The fact is that if the proper information was passed onto the authorities, this shooting could have been prevented. This horrible event didn't occur becasue there's an absence of vetting when it comes to gun purchases.

I asked @POTUS about gun control after yet another mass shooting. He says its too soon to discuss, but wouldn’t have helped in TX anyway.

Domestic abusers cannot own guns. That’s already on the books. Background checks are executed for every purchase from dealers with a federal firearms license. Can we strengthen and improve background checks? We can surely have a discussion about that. Republican Sen. John Cornyn of Texas is proposing a fix to the NICS system to make sure something like not forwarding a domestic violence conviction does not fall through the cracks again (via The Hill):

Sen. John Cornyn (R-Texas) said on Tuesday that he will introduce legislation aimed at strengthening the gun background check system in the wake of a deadly mass shooting in his home state.

“I plan to introduce legislation ... to ensure that all federal departments and agencies, including the Department of Defense, upload the required conviction records into the national database," Cornyn said.

The Texas Republican, citing the Justice Department, added that the number of records currently being shared with the National Instant Criminal Background Check System (NICS) is "staggeringly low."

"That is unacceptable and it must change.”

But this notion that background checks are not universal, or that there aren’t regulations on rifles, or that the NRA is a terrorist organization, or that buying a gun is somehow as easy as buying a pack of gum at the local CVS is just not true. Yes, there are private sales; they’re a small fraction of all gun sales (single digits) and it’s not insane to suggest that most of them are probably transfers between family members, like a father passing his guns down to his son, which is an American tradition. We don’t know for sure, but private sales are not the boogieman that the anti-gun Left makes them out to be.

Also, if want to see a left wing narrative die on this issue, the person who engaged and stopped Kelley from committing more killings is an NRA member and was a certified instructor as well.

Still, the publication was right in noting the NBC reporter’s smug tone:

While many of the questions centered around the Korean Peninsula, Ali Vitali brought up the issue of gun control in an overt attempt to grandstand.

Trump called her out for choosing his trip to Asia to bring up the issue of gun control.

"Well you’re bringing up a situation that probably shouldn’t be discussed too much right now," Trump said. "We could probably let a little time go by, but it’s okay if you feel that’s an appropriate question even though we are in the heart of South Korea."

Just remember; they’re wrong about everything.