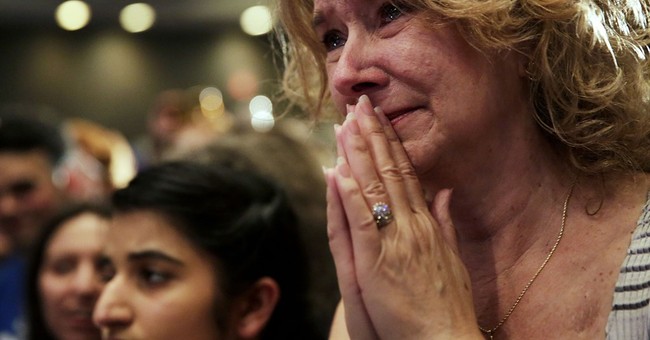 The Democratic Party is in shambles. Say what you will about the Republicans—they have problems too—but at least they’re a national party. For all his faults, Trump was able to virtually get the entire GOP base to vote for him in 2016. The GOP controls Congress, the presidency, two-thirds of the governorships, and 69/99 state legislatures. They’re at the apex of their power. As the GOP licked their wounds and learned from their 2008 and 2012 defeats, the Democrats, smug, content, and insufferable, felt they had advantage for the next generation. They would run the table on national elections due to demographic shifts. Then, Hillary Clinton torpedoed that whole narrative. Time magazine delved into the state of the party, its hit to the mouth after Trump’s win, and noted that things look grim for this regional, shrinking party. As many other, including here, have noted—the Democrats have no leader, no message, dismal fundraising, and seem to be on the brink of civil war over issues on what actually makes one a Democrat.

This piece also cites that Democrats have to do what they think is not all that important: winning back white working class voters. Time is quite adamant that if they don’t do this, Trump will win a second term “with ease.” They also offer a brutal assessment concerning the direction of the Democratic Party. One rallying cry from the Left is that Clinton lost because she was more pragmatic, a centrist. She wasn’t left wing enough. Every time the party has gone this way in national elections, they’ve lost in a landslide. Yes, younger voters might like this direction, but this group, by and large, is huddled around cities and other urban areas. You cannot win an election, nor be a national force if just city dwellers vote Democratic. The 50 largest cities in the U.S. only make up 15 percent of the population. Again, to win back the House, to redraw congressional maps favorable to the Left—you need to rebuild the party apparatuses in the rural areas, which have all but disintegrated. The Democratic National Committee promised to rebuild these structures, but without money—their Republican counterparts are killing them in fundraising—or a message, don’t expect these voters to flock back. They’re not into identity politics; they don’t care about political correctness (no one should), lectures on white privilege, or how police officers are murderers. They want good paying jobs, the ability to raise their families, and live their lives. That’s somehow problematic within the circles of the professional left.

Now, that doesn’t mean that the GOP is popular. The approval numbers for them are way under water, a lot of it fueled by their own rank-and-file voters who are sick of the inaction on the Hill over health care, immigration, tax reform, and jobs. For now, it’s just that the Democrats are much, much worse. They’ve become progressive busybodies, with an insufferable notion that we should all adhere to what they think about the issues and even worse—consider those who disagree with them as being little more than pond scum. Business Insider’s Josh Barro discussed this in a recent op-ed. When you criticize someone for grilling burgers because it contributes to global warming, that’s how you get Trump. No one cares about this issue. And the more you make other people’s lives miserable with protests, lectures, and other forms of throwing a temper tantrum, no one is going to vote Democratic, let alone listen to you. The Democratic Party should be doing some “soul-searching,” instead they’re just throwing epileptic fits about Trump and having trouble creating a new agenda that resonates with voters (via Time) [emphasis mine]

Every party cast out of power endures a period of soul-searching. But the Democrats' dilemma was unimaginable even a year ago, when Clinton seemed to be coasting toward the White House and demographic change fueled dreams of a permanent national majority. Now, eight months into the Trump presidency, the party looks to face its toughest odds since Ronald Reagan won 49 states in 1984. The Democrats are in their deepest congressional rut since the class of 1946 was elected, and hold the fewest governors' mansions--15--since 1922. Of the 98 partisan legislatures in the U.S., Republicans control 67. During Barack Obama's presidency, Democrats lost 970 seats in state legislatures, leaving the party's bench almost bare. The median age of their congressional leadership is 67, and many of the obvious early presidential front runners will be in their 70s by the 2020 election.

The momentum may be on the left, but picking up the 24 seats required to retake the House, and the three states needed for control of the Senate, will mean luring back blue collar workers in places like Ryan's Mahoning Valley district, where the steel plants are shells of their former selves, small businesses are boarded up and payday lenders seem to be on every corner. This used to be a Democratic stronghold, but Trump won three of the five counties in Ryan's district. If Democrats don't refine their pitch to alienated white voters, Trump could win re-election with ease.

This march to the left has become a sprint since Clinton's defeat.

Groups that support abortion rights have stopped offering polite silence to Democrats who disagree. Others are demanding jail time for bank executives. Small-dollar donors are goading progressive groups to advance liberal policies and challenge lawmakers who balk. A group of prominent liberal Democrats, including some 2020 hopefuls, are pushing a national single-payer health care plan--even though its strongest backers acknowledge that it has zero chance of becoming law in this Republican-controlled Congress. Representative Luis Gutiérrez of Illinois threatened on Sept. 8 that Democrats may shut down the government in December if Congress doesn't provide a pathway for undocumented immigrants to become citizens. "Running on progressive values," strategist Adam Green told a candidates' training session in Washington this summer, "is how Democrats will win."

History counters this, at least at the presidential level. The most progressive nominees in recent memory--Michael Dukakis in 1988, Walter Mondale in 1984 and George McGovern in 1972--all suffered landslide defeats.

No one waits on the horizon to broker a peace. The DNC has been hollowed out, first by Obama's neglect and then by a Clinton campaign that raided its talent. Now it is trying to play catch-up, sending $10,000 a month to each state party to help add bodies and channel activists' energy into permanent organizations. But the party is still $3.5 million in the red, and Republicans are outraising it by a margin of roughly 2 to 1.

To complicate matters, there is no Democrat who is a presidential contender who is under the age of 55. It’s geezer world. Right now, the Democrats seem content that Trump’s approval ratings will create a blue wave; their operatives say otherwise and note that if this is the mindset, the party is heading for the cliff again. They need to flip 23-24 seats to retake the House, but they already lost one recruit in NY-27, a targeted race, due to fundraising difficulties and donors admitting that a Democrat probably won’t win there. Also, and I know I’ve said this ad nauseum, if the Democrats turned out every Clinton voter who voted for a GOP member of Congress and had them flip in 2018—it still wouldn’t be enough to retake the House.