RNC Ad Centers On Menendez Trial: ‘Are Democrats Really Going To Let A Convicted Felon Stay In the Senate?’ 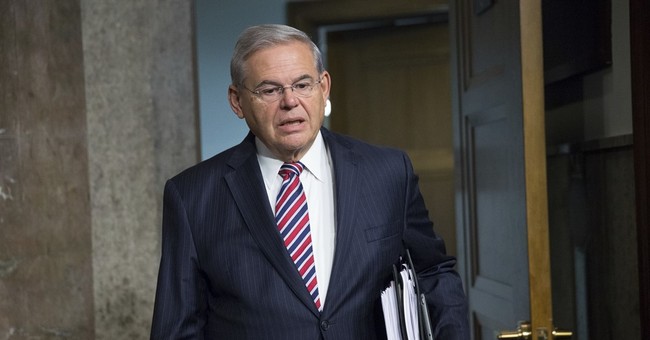 Before we get into the Republican National Committee’s ad about the corruption trial involving Sen. Robert Menendez (D-NJ), let’s rehash why he’s facing these charges. Well, maybe it has to do with him intervening on behalf of his friend, Dr. Salomon Melgen, during a Medicare dispute, taking his private jet to luxurious locations, and greasing the wheels to obtain visas for Melgen’s girlfriends. Politico has a good rundown:

Melgen has already been convicted in a multimillion-dollar Medicare fraud case in Florida and is awaiting sentencing. Prosecutors may seek as much as 30 years in prison for Melgen in that case, a potential life sentence for the 62-year-old ophthalmologist.

So, what happens if Menendez is convicted? Shouldn’t he be shown the door, the way Senate Democrats wanted for the late Ted Stevens when he was convicted of corruption charges, which by the way, was possibly the result of a botched prosecution on behalf of the Justice Department.

“It’s time to put an end to the corruption and influence-peddling…Senator Stevens should step down,” said then-Senator Barack Obama (D-IL) in October of 2008.

“The reality is that a convicted felon is not going to be able to serve in the United States Senate,“said then-Democratic Majority Leader Harry Reid in November of 2008.

“It is clear that Sen. Stevens has broken his trust with the people and that he should now step down,” said Senator John McCain in October of 2008. It was a moot point since the corruption story sunk Stevens’ 2008 re-election campaign. Still, Democrats know the stakes if they lose Menendez’s vote; maybe that’s why the media is mum on the story, and why some Democrats are acting shamelessly hypocritical.

“I don’t think Menendez has to run out and resign if he’s convicted,” said Brad Woodhouse, former communications director for the Democratic National Committee. It’s all in the ad. Enjoy: