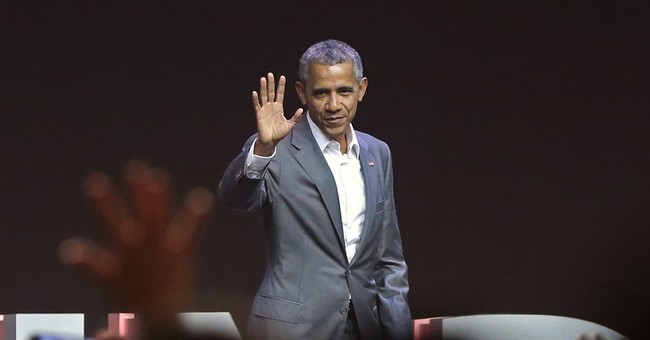 One of the issues facing Democrats is the search for a new leader. After building the party’s brand and message behind one, term-limited politician, no one on the Left really wants to point to a leader. Even Democratic National Committee chair Tom Perez declined to name himself as the party leader, even though technically he is while the Democrats are out of power. The DNC is struggling with fundraising, struggling to find a sense of direction, and constantly having internal battles between the Obama/Clinton wing of the party against the unabashed progressive Bernie Sanders wing that’s yarning to take the reins and push movement more to the Left. So, who’s the relief pitcher? Well, they’re looking to the man who got them in this political rut in the first place: Barack Obama.

It was obvious that Obama was just not going to fade into the ether after he left the presidency. This is Professor Barry; he can’t help himself. Yet, while he has a knack for delivering speeches and giving Democrats a boost of enthusiasm on the campaign trail, the Democrats lost Congress under his watch, then scores of state legislatures, then numerous governorships, and finally the presidency. There are 1,000 fewer Democrats in office across the board since 2008-2009. Meanwhile, the GOP has become the dominant political force in the country, controlling Congress, The White House, 69/99 state legislatures, and two-thirds of all the governorships. While the Obama political machine beat the Republicans twice, the former president ironically was a highly motivating factor for the GOP and conservative grassroots. Now, with the 2018 midterms, a lot of Democrats are excited for Barry’s return, though many are wary about the fact that him stepping in could clog the spot for future leaders. In all, it’s just another case of the Democratic Party having no bench, looking to those who have all but left public life to help them drag their party across the finish line, or so they hope (via The Hill):

Democrats are already nostalgic for Obama as they battle against President Trump’s agenda. When he talks, they listen, as evidenced this week by a tweet from Obama about the violence in Charlottesville, Va., that became the most popular in the history of the platform.

The tricky question now facing the party is how to use the former president on the campaign trail.

Some Democrats are pushing for Obama to have a more elevated role, but Obama has made clear he is wary of sliding back into the role of party leader, which could prevent new leaders from emerging.

Democrats acknowledge that being stuck in the Obama era is a concern, but say the party can’t afford to have him on the sidelines.

“Democrats badly need Barack Obama,” said Brad Bannon, a Democratic strategist. “He offers such a vivid contrast to Trump in behavior and temperament.”

“He always sounded reasonable and acted responsibly even if you disagreed with him,” Bannon continued. “None of the potential Democratic presidential candidates have the visibility or credibility to be effective.”

Others complain Obama has been doing too little to help the party at a time when it is struggling to rebuild.

“For Democrats, never has the contrast been stronger between what we just gave up and what we have now,” Setzer said.

Obama, through his aides, said he wanted to do a “delicate dance” for the 2018 cycle to avoid being used as a rallying tool for the GOP and to prevent President Trump from using him as a punching bag, but this light footprint approach is a joke, right? I mean the only thing that fits that strategy is doing nothing. Everything a former president does makes waves, especially with Obama, given how the media is still in love with him. Also, you don’t think the GOP has people watching his every move. This is going to go way beyond fundraising and speaking tours. And it sounds like Barry is going to have to balance that, with the pressure from party members to really get out there to help Democrats win some seats, possibly retake the House in 2018.

Also, let’s not forget that perhaps the Obama charm faded years ago. He wasn’t able to drag Hillary Clinton across the finish line in 2016—and he did an unprecedented amount of stumping for her. Yet, let’s go back to something conservative commentator George Will said that undercut the former president’s supposed power of speech in 2009, which is that the more he talked about Obamacare, the more it became unpopular; he campaigned for Jon Corzine for governor in New Jersey, Chris Christie won. He campaigned against Republican Bob McDonnell in Virginia, and McDonnell won. He campaigned in Massachusetts’s special senate election against Scott Brown for Senate when the late Ted Kennedy passed away; Brown won. At the outset of his presidency, he tried to get Chicago to host the 2016 Summer Olympics; Chicago was booted in the first round of voting. Obama may excite Democrats for 2018, but as Jon Ossoff’s loss in GA-06, enthusiasm may not be enough to win.

Obama is a big draw for the Left, but he also oversaw it's steep decline.