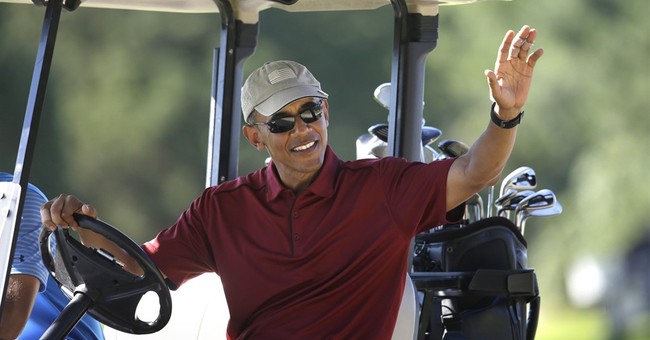 Well, we all knew he was going to come back, though in what capacity—that remained unknown. Barack Obama said that he’s coming out of the bunker to help his party ahead of the 2018 midterms. In July, it was reported that he was going to try and help rebuild the Democratic Party, which was decimated under his tenure. Reportedly, his foray back into the fray will be on the fundraising circuit, specifically helping Democrats, like Ralph Northam, who is running for governor in Virginia. Now, the former president’s aides say that he’s going to walk a “delicate dance,” helping his party raise money and work behind the scenes. He’s also aware of his profile on the national stage and how, unlike Clinton, he doesn’t want to be used as “foil” for the GOP (via The Hill):

Aides will huddle with Obama in the coming weeks to plot out what shape the former president's fall schedule will take. Advisers close to him say that while he will play an active role in helping his party rebuild, much of his work will be behind the scenes.

He is likely to take on fundraising, for example, something he has done for the Democratic National Committee (DNC) and the National Democratic Redistricting Committee since leaving office.

In recent months, Obama has played a larger behind-the-scenes role than was publicly known.

The Hill reported in July that he met with DNC Chairman Tom Perez as well as lawmakers at his office to give his guidance on a number of issues.

But advisers to the former president acknowledge he also doesn’t want to be “a foil” — as one top ally put it — for President Trump and the Republican leadership.

He has to be careful,” said Julian Zelizer, a professor of history and public affairs at Princeton University. “At a moment when President Trump’s approval is falling so fast — including with his base — there is a risk for Obama taking center stage and triggering the energy that many Republicans currently lack.”

“He would be the target against which Trump would direct his fury,” said Cal Jillson, a professor of political science at Southern Methodist University. “From Trump’s perspective nothing better could happen.”

Jillson said that a light Obama footprint on the national stage could allow breathing room for future Democratic leaders to emerge.

Well, given Obama, the prevalence of social media, and the need for Democrats to have someone who they can look to for some resemblance of leadership, let’s see how this light footprint approach works. With Clinton about to reemerge into the limelight with her new book, it’s hard to imagine the media focusing on how Clinton and Obama, the former dynamic duo, are going to be the saviors of the party, despite many members wishing otherwise—especially with Hillary Clinton. The rebuilding project is going to be extensive and one that really hasn’t taken shape given the infighting among Democrats. There are 1,000 fewer Democrats in office than there were in 2008-09. They have a party apparatus that’s all but dead in the regions that need to retake in order to be a vibrant national party. Then, they have to find the candidates, which could mean supporting pro-life and pro-gun rights Democrats, something that’s anathema to the progressive wing of the party. Yet, before that, the Democratic Party needs to find a leader, which they don’t want to talk about—and they need to raise money. Also, do they double-down on the urban areas or do they reach out to the millions of Obama voters who flipped for Donald Trump last year. The party itself is on the verge of civil war, as the California State Democratic Party is about to eat each other over single-payer health care. That’s another issue progressives want to make part of their litmus test. These problems Democrats are facing might take more than a light footprint from a popular ex-president to solve, though let’s not despair too much for a party that’s being chewed up by the meat grinder.