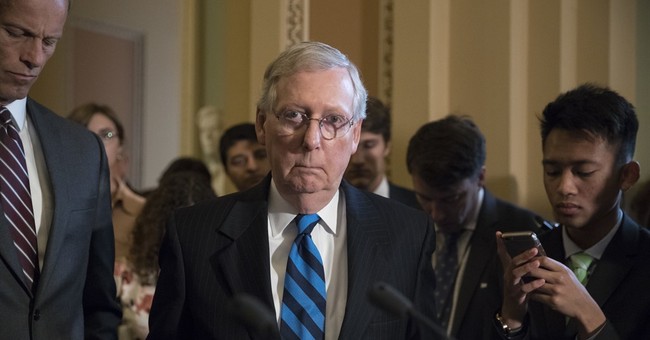 Guy will probably have a deeper dive on this so be on the lookout, but as Cortney wrote last night—the GOP health care bill is dead. Senate Majority Leader Mitch McConnell has a very slim majority to work with and Sens. Susan Collins (R-ME), Ted Cruz (R-TX), Rand Paul (R-KY), Mike Lee (R-UT), and Sen. Ron Johnson (R-WI) were all signaling that they may not even vote to support a motion for advance the bill. It’s part of the incredibly frustrating saga of GOP health care reform on Capitol Hill. After nearly a decade of campaigning to repeal Obamacare, the GOP is still dragging its feet and fighting factions within the party in the effort to try and get something to President Trump’s desk. That collapsed last night when Sens. Paul and Collins were joined by Lee and Sen. Jerry Moran (R-KS) to announce that they would not vote to advance the bill. McConnell was waiting on Sen. John McCain (R-AZ) to recover from eye surgery, but that’s now a worthless venture. What we have before us at present is the legislative death of the Better Care Reconciliation Act with no good options (via NYT):

The announcement by the senators, Mike Lee of Utah and Jerry Moran of Kansas, left their leaders at least two votes short of the number needed to begin debate on their bill to dismantle the health law. Two other Republican senators, Rand Paul of Kentucky and Susan Collins of Maine, had already said they would not support a procedural step to begin debate.

With four solid votes against the bill, Republican leaders now have two options.

They can try to rewrite it in a way that can secure 50 Republican votes, a seeming impossibility since the defecting senators are not suggesting small changes to the existing bill but a fresh start. Or they can work with Democrats on a narrower measure to fix the flaws in the Affordable Care Act that both parties acknowledge.

Senator Mitch McConnell, the Republican leader, conceded Monday night that “the effort to repeal and immediately replace the failure of Obamacare will not be successful.” But he said he would move to pass a measure to repeal the Affordable Care Act now, then work on a replacement over the next two years. That has almost no chance to pass, either, since it could leave millions without insurance and leave insurance markets in turmoil.

As Cortney and Axios noted, this vote to repeal Obamacare with a two-year delay provision to give time to work on another replacement will not sit well with conservatives, who, again, have invested countless hours and resources to to repeal this law; a two-year delay is not what they want. Last Friday, Republican National Committee Chairwoman Ronna McDaniel commented on the health care fight saying, "I think our voters are going to be very upset. I mean they put their faith in us last November and there’s not a single senator in Washington on the Republican side who did not run saying we needed to repeal and replace ObamaCare, and now is their chance; they have this opportunity.”

Madame Chairwoman, with all due respect, “very upset” doesn't describe the fallout this could yield. You’re giving conservative voters a reason to never vote Republican ever again if this totally blows up. Right now, the ship is taking on heavy water and the GOP seems incapable of getting this done without also getting bloodied, bruised, and beaten from their side of the aisle. It’s becoming increasingly more embarrassing by the day, especially when this all came about because the GOP was convinced that Trump was going to lose that they didn’t even bother with coming up with a plan. In the meantime, the American voter and the middle class, who can't afford the premiums, will continue to suffer.

So, where do we go from here? Perry Bacon, Jr. wrote in FiveThirtyEight that this could be the end of the effort, though he added that we’ve seen this before when the initial House push collapsed in March, only for the lower chamber to pass a health care reform package in May. Either way, this is going to be a long process and conservative patience is wearing thin. For now, the current bill is dead:

Gotta wonder if Lee & Moran took the plunge because:
1—10 or 12 senators hated the BCRA;
2—They faced the *least* electoral risk of the 12.

Vote GOP, the party that will repeal Obamacare as long as Obama is there to veto.

These four senators refused to even move the bill to the floor. That’s significant for at least five reasons.

First, McConnell announced over the weekend that the Senate would delay any votes on the health care legislation until Arizona Sen. John McCain returned after surgery. McCain was not expected back to the Senate immediately, so this vote was not imminent.

Lee and Moran could have held back on their opposition, waiting for McCain. That they decided instead to blast the legislation in public suggests that they basically could not wait to declare their opposition. It seems they really hate it. In his statement, Moran hinted that he wanted a total overhaul of the bill, saying “we must now start fresh with an open legislative process.” This could suggest that he wants an entirely new bill.

Second, these four refused to vote even for a motion to proceed, which is only a procedural step. If they had voted for the motion, these senators could have offered amendments and still voted against the bill if they were not comfortable with the final product. This is another sign that they really hate the bill.

The case that this is not over

First, we’ve been through this before. When the House version of the health care bill collapsed in March, I wrote a very detailed article about how the failure potentially portended bigger problems for Trump’s presidency. That conclusion did not hold up well, and the House passed a bill on May 4.

The House had essentially two versions of its health care bill, the one that failed and the one that passed. If McConnell abandons this version, he will need to write a third bill. But this is not an unimportant issue where it make sense for party leaders to give up easily. It is the repeal of Obamacare, one of the defining issues of the Republican Party since 2010. Many of these senators campaigned on repealing Obamacare, as did Trump.

Secondly, many of the more moderate Republicans, such as Capito and Portman, didn’t emerge as opponents of the legislation in the initial days after it was unveiled. Republican leaders could still be very close to the 50 that they need.