Feeling The Bern: Pelosi Has A Primary Challenger 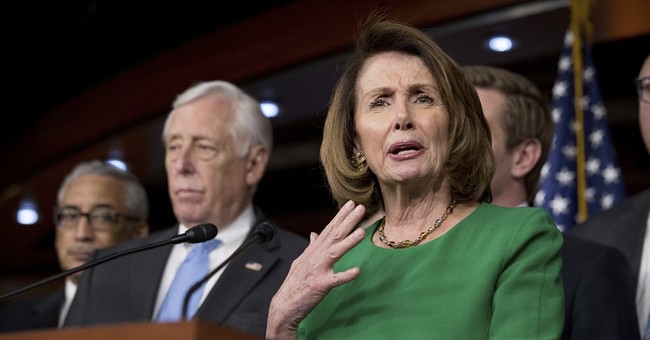 Remember in December of 2016, after failing yet again to retake the House of Representatives, when Pelosi said this to CBS News’ John Dickerson:

“I don’t think people want a new direction, our values unify us and our values are about supporting America’s working families. That is one that everyone is in agreement on. What we want is a better connection of our message to working families in our country.

So after being kicked out of the majority in 2010, and subject to a shellacking in 2014 and 2016, I think it’s clear that they don’t want the Democrats helming the ship. That seems clear, Madame leader. America’s working class weren’t enthused by your message because you didn’t have one in 2014 or 2016. Right now, the party is being split in two by the progressive and establishment wings, a division that was rather explicit on the Democratic Party's (dis) Unity tour that Sen. Bernie Sanders (I-VT) and Democratic National Committee chair Tom Perez undertook last week. There are fights about social policy, especially health care, and now more heartburn over whether pro-life Democrats are a) really members of the party and b) deserving of support. The party is stumbling and the progressive wing sees people like Pelosi as the problem. That’s why she’s facing a primary challenge from Stephen Jaffe, a lawyer who worked with the Sanders campaign monitoring the Nevada Caucuses. His motivation could be summed up in two words: Bernie. Sanders (via NY Observer) [emphasis mine]:

“My goal is to try to pull the Democratic Party away from the establishment, corporations, big money, big oil, big pharma, and return it to the people.”

Jaffe co-founded the South Beach District 6 Democratic Club in San Francisco, for which he currently serves as president, and has a strong record of fighting for grassroots efforts in the congressional district Pelosi represents. Recently, he’s been pushing to remove dark money from politics in the San Francisco area.

Sanders‘ campaign, as it has done for hundreds around the country, inspired Jaffe to run for office, to become the change that the Democratic Party so desperately needs. “I think Ms. Pelosi has served long and—for the most part—well. But, from my observations of the last year or so, particularly in her Town Halls with voters, I think she’s really out of touch with the voters in San Francisco. I think the district needs to be represented by someone more in touch with the voters and the constituents here, and I think I’m that person.”

Well, he’s not alone. In fact, 67 percent of the country feels that Democrats are out of touch. Pelosi’s comments from December only magnifies that aspect and increases frustration with the hard core left that feels they have what it takes to win again. If Pelosi can be bumped off in a primary, which is a long shot given the advantages of incumbency along with name recognition, then it’s certainly a warning shot. In fact, it would be big league. At the same time, even Jaffe admitted that Pelosi has served well in Congress. That might still be the prevailing mindset with Bay Area voters.

Pelosi has shown time and again how she’s unable to lead her party to the majority. If they wanted her out, they could have booted her. With no chance that a Republican would win in this progressive bastion, a more vibrant, left-leaning representative could have taken her place with no consequence. It never happened.

Feeling the Bern might not have been enough to beat the Clinton machine, but it’s moved down ticket. This might be good news for Democrats if Bernie Sanders was actually a member of the party. It’s a bit odd that the person who should be the leader of the Democratic Party right now, Tom Perez, is booed and heckled—while the independent is the one who gets all the love from the Left's most vocal supporters. Sanders energized the very elements that could have pushed the Democrats over the top in 2016. So, is Sanders a cancer or a cure for the Democratic Party? Before they answer that, the Left needs to find a legitimate leader, figure out their course for pro-life Democrats, and—most importantly—win some special elections that are coming up.