As More Senate Democrats Support Blocking Gorsuch, Remember When Reid And Schumer Said This About Filibusters 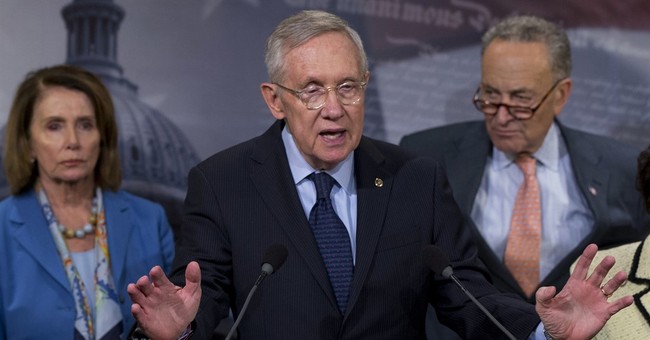 Well, if there’s one thing that’s similar between Senate Minority Leader Chuck Schumer (D-NY) and his former boss, Harry Reid, it’s that they're both unhinged and have a stranglehold over their caucus. Reid had an iron grip on his Democratic colleagues and it appears Schumer has the same skills necessary to possibly cobble together enough votes to prevent the Senate from invoking cloture on the Supreme Court nomination of Judge Neil Gorsuch; a conservative who is filling the vacancy left by a conservative. The balance of the Court is not at stake, but Democrats are going to use all their powder on this fight, possibly forcing Senate Republicans to nuke the filibuster rules for Supreme Court nominations. If that occurs, a simple majority gets Gorsuch on the Court. If there is a second vacancy, the GOP has a chance of putting someone on the Court who is the Left’s worst nightmare. They could choose William Pryor or some other red meat conservative and there would be nothing the Democrats could do. Fine by me.

Sen. Pat Leahy (D-VT) said that he isn’t inclined to support a filibuster, but out of the nine Democrats who said that Gorsuch deserves a hearing and a vote, they’re starting to fall into the 'block Neil camp' rather fast. Sen. Dick Durbin (D-IL) is now onboard, as are Jeanne Shaheen (D-NH) and Sen. Maggie Hassan (D-NH). Remember when she said this:

Also, when Senate Democrats decided to nuke the filibuster rules for non-Supreme Court nominees in 2013, Reid said that filibusters should only be applied to treaties and impeachment:

Remember for the first 140 years as a country, there were no filibusters. The founding fathers were very clear in what they thought there should be supermajorities [for]. Impeachments. And, of course, on treaties. And in the same paragraph, as it deals with two-thirds votes, specifically the founding fathers did not mention, at all, other things other than those two things that required a super majority.

Schumer, at the time, said that Democrats would "much prefer the risk of up-or-down votes" when it comes to majority rule than the risk of total obstruction. “No matter who’s in power,” he said. Oh my, have times changed.

The nominations of Clearance Thomas and Robert Bork, long viewed as evil reptilian humanoids by the progressive Left, were never filibustered by the Senate. Bork went down in defeat and Thomas was confirmed by a narrow 52-48 margin. Based on these past remarks, Schumer and Reid would not have backed this inane attempt to filibuster Gorsuch. Please read Guy's post on how the Senate is preparing for nuclear war over this nomination.

Sen. Orrin Hatch (R-UT) said that come hell or high water, Gorsuch would be confirmed by “any means necessary.” He’s qualified and has broad support across the political spectrum. Allahpundit argues that just adds more political cover for the GOP to go nuclear. Even solid moderate Sen. Susan Collins (R-ME) has said that she may support her party’s push to change the rule should the time arise. Sen. Lindsey Graham (R-SC) has pretty much said a nuclear strike is coming if Democrats keep playing games.

If there were any dirt at all on Gorsuch, you might get a handful of Republicans refusing to go nuclear on his behalf, on the theory that Trump could and would nominate a more acceptable nominee in his place. But there’s no dirt, and so a successful filibuster would mean that not only can’t Gorsuch be confirmed, neither can anyone who replaces him. Republicans won’t go nuclear for him personally, they’ll go nuclear because they’re not going to stand around and leave that SCOTUS seat vacant for four years. Especially when they’ve got political cover from respected liberals to put Gorsuch on the bench. They’ll push the button.