Oh God: Hillary Says She's 'Ready To Come Out Of The Woods' 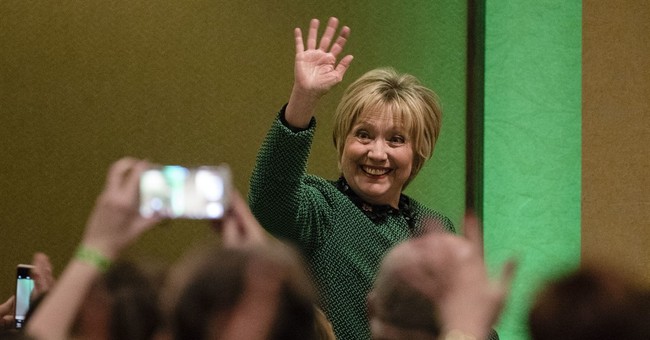 A lot has happened over the past few weeks. The GOP Obamacare replacement bill was released and was greeted with disappointment from conservatives. Judge Neil Gorsuch’s confirmation hearings have begun—and Congress is looking into possible collusion between the Trump campaign and Russia. Yet, over in Clinton land, the former first lady said on St. Patrick’s Day in Scranton, PA that she’s ready to “come out of the woods” (via NYT):

“I’m like a lot of my friends right now. I have a hard time watching the news, I’ll confess,” she said, according to a video of the event. “I am ready to come out of the woods and to help shine a light on what is already happening around kitchen tables, at dinners like this.”


Mrs. Clinton spoke to a crowd of nearly 700 people, according to Mary Clare Kingsley, a president of the Society of Irish Women, which held the event: about 500 people in the ballroom and an additional 175 who watched the speech via video in an overflow room. Ms. Kingsley said it was the largest attendance for the event, surpassing the total when the group hosted Barack Obama during the presidential campaign of 2008.

So, what does this mean? Is she going to run again in 2020? I don’t even want to think about it because a) we’re a long ways away from the next election; and b) the fact that Clinton reemerging is just plain horrific. She delivered a speech, she talked about her family roots, and how her grandfather was a coal miner and later worked in a lace mill in the city.

In 1980, Bill Clinton lost his gubernatorial re-election bid in Arkansas. He spent a great deal of time traveling across the state, to every county, and spoke to almost anyone who would talk to him about where he went wrong as governor. He listened and in 1982 (Arkansas had two-year terms at the time) he reclaimed the governor’s mansion, where he remained before moving to the White House in 1993.

It’s still way too early to glean anything from this, but Clinton is a two-time presidential loser, the more energetic and progressive wing of the party wants her gone, and unlike Bill, she’s not a good campaigner. She doesn’t know how to connect with people. That’s going to be brought up with any discussion regarding political resurrection. There have also been rumors that she’s running for office again, albeit at the local level: The Mayor of New York City. Preliminary polling shows that she would handily beat Bill de Blasio. Still, I find it hard that Clinton, who tried national office twice, would settle for mayor. Seems like a step down from someone who has always thought more of herself in the political arena.