To The Lifeboats: Moderate Republicans Are Starting To Pull Their Support For Obamacare Replacement Bill 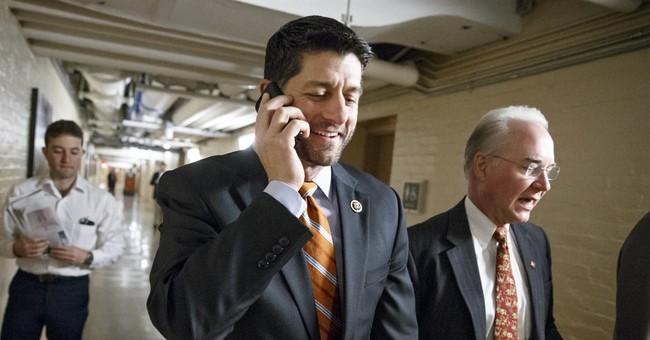 Despite Speaker Paul Ryan rolling up his sleeves, putting on his professor’s hat, and explaining how the GOP’s replacement heath care bill—the American Health Care Act—is better than Obamacare, moderate Republicans are beginning to head for the bunker. It looks like this bill isn’t going to the Senate; Sen. Tom Cotton (R-AR) issued a warning on ABC’s "This Week" Sunday warning his House colleagues to not pass a bill that’ll die in the Senate. He said that such a move could jeopardize the House Republican majority. The conservative wing of the party is pretty much against the AHCA since it didn’t offer a clean repeal. Not to mention that it’ll leave over 20 million Americans without health insurance by 2020 and it doesn’t curb premium hikes.

That’s not necessarily a winning narrative. With the prospects of tough reelections if they vote for a bill that increasingly looks like it’ll go down in flames in the Senate, moderate GOPers are pulling support (via CNN):

A devastating analysis from the Congressional Budget Office on the House GOP bill to repeal Obamacare has rattled moderates Republicans in the House, who are uneasy about the prospects of voting for a proposal that increasingly appears dead on arrival in the Senate.


Florida Republican Rep. Ileana Ros-Lehtinen said publicly Tuesday that she wouldn't be able to support the GOP health care legislation after the CBO score revealed the high number of people who would lose insurance.

"I plan to vote NO on the current #AHCA bill. As written the plan leaves too many from my #SoFla district uninsured," the Florida congresswoman wrote in two consecutive tweets. "As #AHCA stands, it will cut much needed help for #SoFla's poor + elderly populations. Need a plan that will do more to protect them."

Republican Rep. Leonard Lance, a moderate from New Jersey who Democrats believe will be vulnerable in 2018, told CNN that he believes the House bill will fail in the Senate. As he eyes his own reelection campaign next year, Lance said he doesn't want to support a legislation that would be rejected by his Republican colleagues across the Capitol.

Rep. Charlie Dent, a Pennsylvania Republican and member of the House's moderate Tuesday Group, signaled another concern among moderates: that conservatives in the GOP conference are exerting immense influence over President Donald Trump and potentially imperiling efforts to reform healthcare at all.

Dent told CNN that rolling back the Medicaid expansion before 2020 -- which conservatives have been asking the White House to do -- would be a "non-starter" and could potentially endanger the legislation on the House floor and in the Senate, where nearly 20 members hail from Medicaid expansion states.

"Taking that date back from 2020 is a huge problem. It is a non-starter for many," Dent said, adding that he spoke not only for himself but other members of the Tuesday Group.

Can the GOP slow down on health care? The short answer is not really. Guy wrote an analysis on why this question is tricky, namely that it’s hard to take Republicans who say they need more time seriously, given that they've had seven years to formulate a comprehensive reform package. If they’re not prepared, then it is right to ask this question: what the hell were you guys doing for seven years?

All politicians feel that they’re vulnerable, even those who consistently garner 60 percent of the vote every election year. With the strength of the GOP at the state-level, the reduction in competitive districts, and the hyper partisan make up of the electorates in these respective congressional districts, I find it hard to believe (so far) that the GOP grip on the House is shaky. Yet, that being said, it’s still not the best idea to vote for a bill that will surely die in the Senate. I think right now conservatives are right to voice their disappointment since the GOP had several years to craft a new bill, only to give us one that keeps the most expensive provision intact: Medicaid expansion. The amendments by the Republican Study Committee—work requirements, capping new enrollment after 2018—are good, but moderates are backing out and some, like Dent, are using Medicaid as a reason to jump ship. Also, haven't you noticed that Trump is pretty much staying at arms length from this bill? It seems as if this bill is on life support.