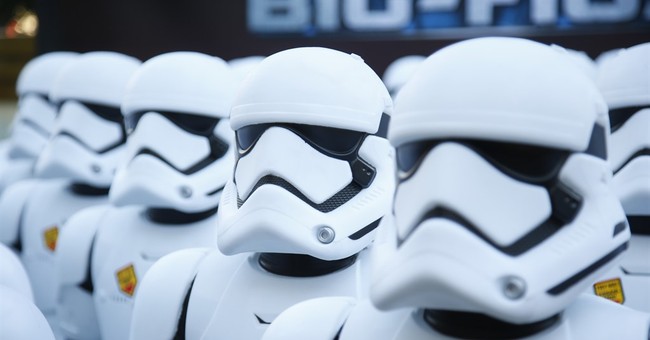 Princeton University Class of 2012’s reunion is centered on a Star Wars theme, but you shouldn’t show up as an Imperial Stormtrooper or any related gear because it could be construed as racist. No, I’m not kidding. People actually think that those of us living in the real world will be triggered by a made up universe, where Imperial Star Destroyers dominate the galaxy, lightsabers are a thing, and lightning can come from a Sith Lord’s fingertips. Are we all on bath salts? Now, are all progressives on bath salts (or sniffing glue) because this is insane. The Harry Potter books convey the themes of genocide and blood purity (“Mudbloods” vs. pure bloods) in a more explicit manner than Star Wars—and both are still not real. This is manufactured controversy (via Washington Times):

Graduates from Princeton’s 2012 class will not be able to attend a “Star Wars”-themed party in Stormtrooper gear due to fears that it will convey a racist message.

A rules committee organizing a five-year class reunion party in early June around the fictional “Star Wars” universe was contacted about characters allegedly inspired by World War II-era events. Subsequently, Stormtroopers will not be allowed.

A few of our classmates reached out expressing concerns over our choice to use Stormtroopers as our costume inspiration,” the email said. “We have been informed of the origin of this word and its connections to early- to mid-20th century Germany. This is something neither we nor anyone on your Reunion Committee were aware of, but something we take very seriously. Tonight we made the unanimous decision to remove these costumes.”

Yes, because troops dressed in all-white body armor armed with blasters who are part of the Imperial Starfleet are totally the same as the paramilitary Sturmabteilung from which the term stormtrooper is associated with in World War II  (“brownshirt” is another one)-- said by no one who is rational.  I think that the precious snowflakes who brought this complaint forward are not serious people…in either galaxy.