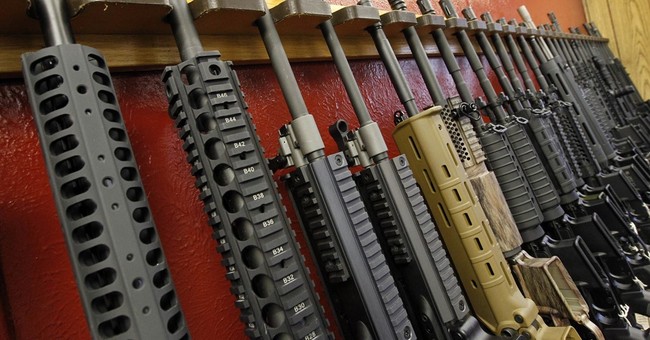 It was not a good day for Second Amendment rights yesterday. Maryland’s Fourth Circuit Court of Appeals upheld the state’s ban on assault weapons that was passed after the horrific Sandy Hook school shooting. In a 10-4 decision, the court ruled that the Second Amendment does not extend to so-called weapons of war (via Reuters):

A federal appeals court on Tuesday upheld Maryland's ban on assault rifles, ruling gun owners are not protected under the U.S. Constitution to possess "weapons of war," court documents showed.

The U.S. Court of Appeals for the Fourth Circuit decided 10-4 that the Firearm Safety Act of 2013, a law in response to the massacre in Newtown, Connecticut, by a gunman with an assault rifle, does not violate the right to bear arms within the Second Amendment.

"Put simply, we have no power to extend Second Amendment protection to the weapons of war," Judge Robert King wrote, referring to the "military-style rifles" that were also used during mass shootings in Aurora, Colorado, San Bernardino, California, and Orlando, Florida.

These are "places whose names have become synonymous with the slaughters that occurred there," he wrote, noting that the Supreme Court's decision in the 2008 District of Columbia v. Heller case excluded coverage of assault weapons.

This case has been in legal limbo for some time. The publication added that U.S. District Judge Catherine Blake upheld the state’s ban of AR-15 rifles, though a smaller panel of the Fourth Circuit in a 2-1 decision ruled the law has to be revisited by the lower courts. They kept the ban in place in the interim. Now, an anti-gun state has finally decided that the ban shall stay. I guess we shouldn’t have been shocked at the outcome. Also, appeals to the Supreme Court might also be met with disappointment, as they’ve passed on hearing arguments about the constitutionality on so-called assault weapons bans for the past couple of years. For now, I guess we have to tolerate blue states having anti-gun laws that infringe on the civil rights of the Americans who live in those states, while Republican, pro-gun, pro-civil rights states have their set of laws and respect the Constitution. In other words, the blue state, red state divide on firearms remains. You win some, you lose some—that’s the nature of how our system works, but that doesn’t mean we can’t try again later.

Matt Vespa
Boehner Sent a Copy of His Book to Ted Cruz. Here's Where He Put It
Rebecca Downs
How Mitt Romney Is Working with Senate Democrats...To Destroy Over a Million American Jobs
Matt Vespa