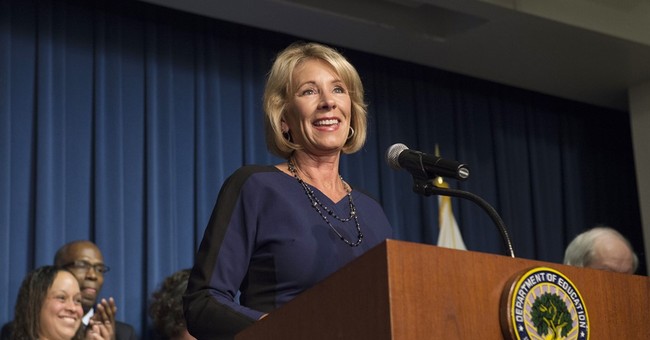 On February 10, Education Secretary Betsy DeVos’ meeting at the Jefferson Middle School Academy in Washington D.C. was met with resistance. Some protesters temporarily blocked her from entering the building, but she eventually got inside. DeVos predecessor, Arne Duncan, said that regardless of differences of opinion; the new education secretary shouldn’t be prevented from doing her job.

Even the teachers unions weighed in, namely American Federation of Teachers President Randi Weingarten, who said that while she supports the protests—she doesn’t condone violent acts. She wants DeVos to visit public schools. This came after she heard from fellow activists at the school on the day of the protest that one zealous DeVos protester almost knocked her down. Now, the U.S. Marshal Service is handling her security (via WaPo):

The U.S. Marshals Service says it is providing security for Education Secretary Betsy DeVos after a handful of protesters prevented her from entering a D.C. middle school.

The move is unusual for the Education Department, which typically has a team of civil servants guarding the secretary, and for the marshals, law enforcement officers who are generally responsible for protecting federal judges, transporting prisoners, apprehending fugitives and protecting witnesses.

The last Cabinet member protected by marshals was a director of the Office of National Drug Control Policy, said Lynzey Donahue, a spokeswoman for the Marshals Service. That office ceased to be a Cabinet-level position in 2009.

Donahue said that for security reasons, she could not provide any information about the number of marshals assigned to DeVos or say whether they are providing round-the-clock protection. It is unclear how long the arrangement will last.

Let’s hope that other school visits on DeVos schedule occur with less drama.