She Persisted: Betsy DeVos Calm And Collected After Protesters Blocked Her From Entering DC School 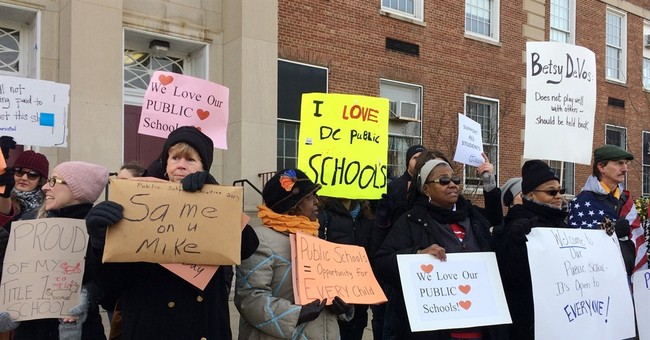 As Cortney wrote earlier today, protesters angry that she was confirmed as education secretary blocked her from entering Jefferson Middle School Academy in Washington D.C. She eventually was able to get inside the building to meet with the administrators of the school (via WaPo):

As The Washington Post's Emma Brown reports and the video above shows, DeVos was prevented by protesters from entering a Washington public school on Friday morning. After the demonstrators blocked the staircase she was trying to use and shouted at her, DeVos returned to her car, escorted by an aide. She later used another school entrance and went about her work.

One of DeVos’ predecessors, Arne Duncan, tweeted whether you agree or disagree with her position on education; she needs to be let into public schools to do her job. Even Randi Weingarten, President of the American Federation of Teachers, a member of the AFL-CIO, who is staunchly opposed to DeVos, said that she should be allowed to visit public schools. Her tweet came after she heard a protester blocked and almost knocked down the education secretary.

Just heard a protester blocked & almost knocked Secy @BetsyDeVos down at Jefferson.We don't condone such acts.We want her to go to pub schls

After the incident, DeVos released a statement, where she said she respects peaceful protests and will not be deterred in executing her duties as education secretary:

"Focusing on their students and families is at the heart of Jefferson Academy's approach, and that's exactly what I believe is at the heart of providing an exceptional education. Great teachers and leaders help make great schools, and I was honored to speak with Jefferson's team about our shared commitment to strengthening public education.

"I respect peaceful protest, and I will not be deterred in executing the vital mission of the Department of Education. No school door in America will be blocked from those seeking to help our nation's school children