Did Puzder's Hiring Of An Illegal Immigrant Kill His Nomination? Other Nominees Have Fallen For That Reason 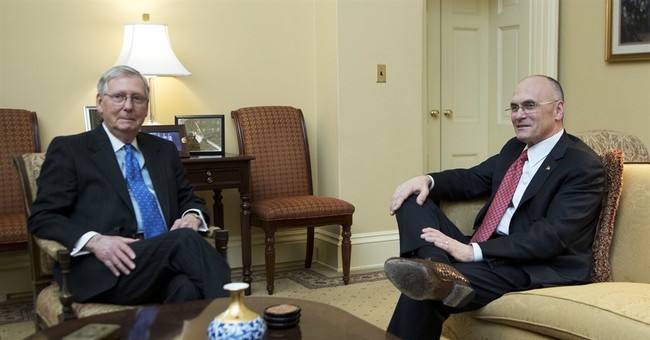 BREAKING: @AndyPuzder to withdraw his nomination for Labor Secretary.

Well, the assault on Donald Trump’s Labor secretary nominee didn’t last long. As Christine wrote, Andrew Puzder is expected to withdraw his nomination due to lack of GOP support stemming from allegations of spousal abuse, which his ex-wife said are false, and the revelation that he hired an illegal alien as a housekeeper 25 years ago. As a result, several Senate Republicans were on the fence about his nomination, voicing their hesitation to confirm Puzder. They wanted to see how he would fare at the hearings. Puzder is the CEO of Hardee’s and Carl’s Jr. and Democrats were prepared to use the fast-food chain’s commercials, which are considered racy (it’s women in bikinis eating hamburgers) to attack him.

That would have been insanely entertaining, but that’s not going to happen. Ed O’Keefe at The Washington Post reported Sen. John Thune’s (R-SD) hesitancy was a huge red flag since he’s the senator that’s usually tasked with whipping support for major Republican initiatives. One of the reasons: his hiring of an illegal immigrant as a housekeeper. It's not the first time a nomination was killed due to an unfortunate hire.President Bill Clinton lost two attorney general nominees, Zoe Baird and Kimba Wood, to the same problem--and this is probably more than anything what did him in.

Puzder, the chief executive of CKE Restaurants, is set to appear before the Senate Health, Education, Labor and Pensions Committee for a long-delayed hearing amid a protracted review of his vast personal wealth, details of a rancorous divorce more than 25 years ago and revelations that his family once employed an undocumented immigrant as a housekeeper.

Democrats on the panel who oppose Puzder are vowing to show racy images of bikini-clad models eating hamburgers that appeared in television commercials run by his restaurant chains. His supporters are planning to eat biscuits from Hardee’s — one of Puzder’s burger chains — for breakfast while tracking the hearing from a makeshift war room.

In addition to Thune, Republican Sens. Rob Portman (Ohio), Thom Tillis (N.C.), Susan Collins (Maine), Johnny Isakson (Ga.), Lisa Murkowski (Alaska) and Tim Scott (S.C.) have said this week that they are on the fence regarding Puzder. Collins, Isakson, Murkowski and Scott sit on the HELP Committee while the others do not — signaling that the concerns about Puzder are widespread.

Thune’s hesitancy is notable because his leadership role makes him responsible for helping to build support for big-ticket GOP causes. But he told reporters Wednesday that he wants to know more about why Puzder employed an undocumented housekeeper and how he paid her. Tillis cited the same concerns.

Puzder revealed to a Senate committee this month that he was unaware of the woman’s immigration status when he hired her. She was terminated and Puzder later paid federal and state back taxes.

EXCLUSIVE: Top Senate Rs have urged the WH to withdraw Puzder nomination. There are 4 firm no votes and up to 12, source says. Next on CNN