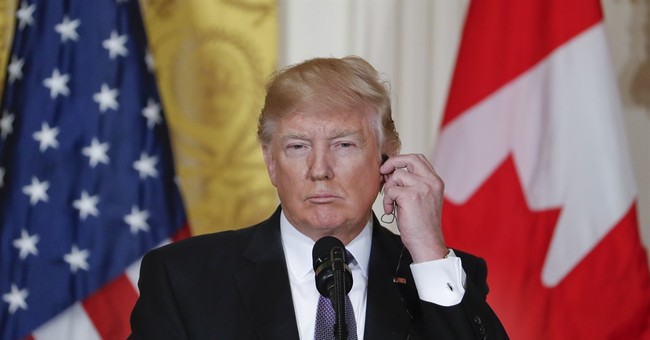 President Donald Trump’s executive order on immigration remains in legal limbo. They recently filed briefs for an en banc hearing with the Ninth Circuit Court of Appeals, in which a three-judge panel unanimously upheld the nationwide restraining order issued by Washington State District Judge James Robart. On Friday, Chief Judge Sidney Thomas requested an en banc hearing, asking the Department of Justice and Washington State to file briefs by Thursday. An 11-member panel selected at random from the 29 active judges on the court will decide whether a rehearing is going to occur. A majority is needed for this motion to move forward.

The president issued this executive action as a national security priority, which isn’t absurd since the Center for Immigration Studies found that 72 terrorists came from the seven countries in the controversial travel moratorium provision of the order [emphasis mine]:

In June 2016 the Senate Subcommittee on Immigration and the National Interest, then chaired by new Attorney General Jeff Sessions, released a report on individuals convicted in terror cases since 9/11. Using open sources (because the Obama administration refused to provide government records), the report found that 380 out of 580 people convicted in terror cases since 9/11 were foreign-born. The report is no longer available on the Senate website, but a summary published by Fox News is available here. The Center has obtained a copy of the information compiled by the subcommittee. The information compiled includes names of offenders, dates of conviction, terror group affiliation, federal criminal charges, sentence imposed, state of residence, and immigration history.

The Center has extracted information on 72 individuals named in the Senate report whose country of origin is one of the seven terror-associated countries included in the vetting executive order: Iran, Iraq, Libya, Somalia, Sudan, Syria, and Yemen.

According to the report, at least 17 individuals entered as refugees from these terror-prone countries. Three came in on student visas and one arrived on a diplomatic visa.

At least 25 of these immigrants eventually became citizens. Ten were lawful permanent residents, and four were illegal aliens.

These immigrant terrorists lived in at least 16 different states, with the largest number from the terror-associated countries living in New York (10), Minnesota (8), California (8), and Michigan (6). Ironically, Minnesota was one of the states suing to block Trump's order to pause entries from the terror-associated countries, claiming it harmed the state. At least two of the terrorists were living in Washington, which joined with Minnesota in the lawsuit to block the order.

Thirty-three of the 72 individuals from the seven terror-associated countries were convicted of very serious terror-related crimes, and were sentenced to at least three years imprisonment. The crimes included use of a weapon of mass destruction, conspiracy to commit a terror act, material support of a terrorist or terror group, international money laundering conspiracy, possession of explosives or missiles, and unlawful possession of a machine gun.

So, the travel moratorium isn’t some arbitrary provision. It’s based in some truth. It’s also true that three are state sponsors of terror, while the other four have shoddy central governments or no government at all. You think this is a good foundation for vetting? Lee Smith at The Weekly Standard also listed terror suspects who were caught or killed that are from these countries as well:

Abdul Razak Artan, a Somali refugee, and permanent resident alien, used his car and a knife to attack fellow students at the Ohio State University in December, 2016 before he was shot to death by police.

Anwar al-Awlaki was an American-born dual national with Yemeni citizenship who, according to Michael Leiter, former director of the National Counterterrorism Center, had a "direct operational role" in the "underwear bomber" plot against a Detroit-bound plane with 289 passengers aboard. Awlaki may also have played a part in the Fort Hood attack, which left 13 dead, and another 30 wounded. Awlaki was killed in a 2011 drone attack ordered by President Barack Obama.

Mansour Arbabsiar, a naturalized American citizen who was also an Iranian national, plotted together with the Islamic Revolutionary Guards Corps to kill the Saudi ambassador to the United States in a Washington, D.C. restaurant. The operation would have likely resulted in mass casualties in the nation's capital. In September 2013, Arbabsiar was sentenced to 25 years in prison.

No wonder why the Obama administration selected the very nations listed on Trump’s order as areas of concern in their 2015 visa waiver program.