Busted: 75 Percent Of Illegal Aliens Rounded Up Over The Weekend Had Criminal Records 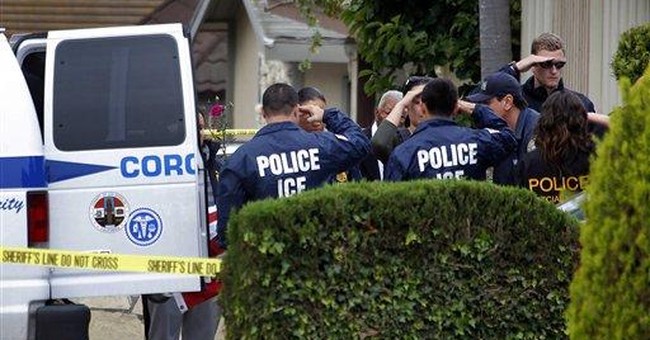 Over the weekend, immigration enforcement agents rounded up hundreds of illegal aliens from across the country. It was not a Trump initiative—the wheels for these raids were set in motion before he was sworn in—but it was certainly in the spirit of one. Immigration activists noted that the nature of these raids was harsher—whatever that means. The Department of Homeland Security said that 75 percent of those who were rounded up had criminal records (via The Hill):

The Department of Homeland Security (DHS) on Monday said that 75 percent of the people detained last week in Immigration and Customs Enforcement (ICE) raids were “criminal aliens.”

President Trump last month signed an executive order calling for the construction on his proposed U.S.-Mexico border wall to begin. Another order ended the “catch and release” policy, which allowed people who crossed the border to return to Mexico without being detained.

The new order also expanded the definition of “criminal alien” to include individuals who entered the country without authorization, which was originally considered a misdemeanor offense. Immigrants who have "committed acts that constitute a chargeable criminal offense" are now priorities under the order, even if they have yet to be convicted.

The deportation of criminal aliens isn’t an unpopular proposal. In fact, it’s exactly what immigration enforcement officers should do. The fact that 75 percent who were arrested this weekend shows—unsurprisingly—that Obama and the Democrats don’t care about enforcing of federal immigration laws. After eight years of dithering or outright negligence, you can see how this—and many other issues—could give rise to a political outsider, like Trump, to win an election. When a Democrat, like New York City Mayor Bill De Blasio, says that illegals wouldn’t be deported if they were caught drunk driving, you see why voters trust Republicans on law and order and national security issues.