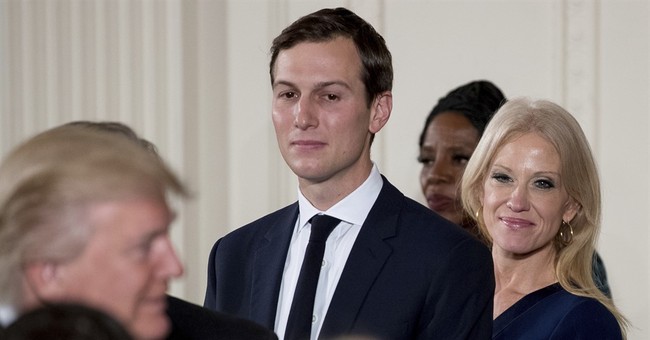 Yesterday, Newsweek tried to take a swipe at the Trump White House, reporting that senior staffers have private emails accounts with the Republican National Committee. You can almost hear the liberal haranguing through the piece: Oh my god—they’re just like Clinton. Didn’t the GOP slam Clinton for email arrangements like this? This is hypocrisy. This is bad optics:

The system (rnchq.org) is the same one the George W. Bush administration was accused of using to evade transparency rules after claiming to have “lost” 22 million emails.

Making use of separate political email accounts at the White House is not illegal. In fact, they serve a purpose by allowing staff to divide political conversations (say, arranging for the president to support a congressional re-election campaign) from actual White House work. Commingling politics and state business violates the Hatch Act, which restricts many executive branch employees from engaging in political activity on government time.

But after then-candidate Donald Trump and the Republicans repeatedly called for “locking up” Hillary Clinton for handling government work with a private server while secretary of state, the new White House staff risks repeating the same mistake that dogged the Democrat’s presidential campaign. They also face a security challenge: The RNC email system, according to U.S. intelligence, was hacked during the 2016 race. “They better be careful after making such a huge ruckus over the private email over at the State Department,” says former Bush administration lawyer Richard Painter.

For starters, Hillary Clinton’s email server was not part of a national party apparatus; it was located in her home for which she used to conduct official business. Second, it wasn’t authorized by the State Department, even though she said that it was allowed; a point negated by the inspector general’s report on the matter. Moreover, if she had consulted with State Department officials about this email arrangement, it would have not been approved.

Having an RNC email isn’t even comparable to Clinton’s email fiasco, where she violated the Federal Records Act by deleting emails. She lied about the reasoning for having such an arrangement; saying it was out of convenience, though it was later revealed in a withheld email that it was because she was afraid her personal information could be accessed. She had over 2,000 emails with classified information (personally writing 104 of them) that were sent and received through her unsecure server. Returning to those deleted emails, doesn’t anyone find it odd that the employee of the company that was hired to host the server pleaded the Fifth when called before Congress? Clinton also used 13 devices connected with that server, some of which were destroyed by State Department staffers with hammers, which isn’t the protocol.

None of that happened here. We’re less than a week into the Trump presidency, and Newsweek appears to have thought they had something to cut this White House’s Achilles’ tendon. There’s no evidence that Kellyanne Conway, Jared Kushner, Sean Spicer and Stephen Bannon—the staffers who were the subject of this piece—had used these accounts for official business. If they did, they have 20 days to make an electronic copy:

Since this story was published, the RNC has deleted the emails of Bannon, Kushner and Conway. RNC spokesman Ryan Mahoney told Newsweek Wednesday night that the emails were set up only for distribution lists, “There is nothing wrong with having an RNC account if it is not used for any official government business,” he said. “In this case, the officials previously employed by the Trump campaign never had functional email accounts with the RNC. The RNC has various distribution lists to communicate with state parties or campaigns, and as a byproduct these contact groups are assigned RNCHQ.org addresses that only forward to external accounts at their respective organizations.”

If Trump staffers were using the RNC email addresses, they were subject to the “Disclosure Requirement for Official Business Conducted Using Electronic Messaging Accounts," a law, 44 U.S.C. 2209, that went into effect in 2014. If White House staffers have already used the RNC emails system for White House work, they must copy or forward those communications into the government system within 20 days.