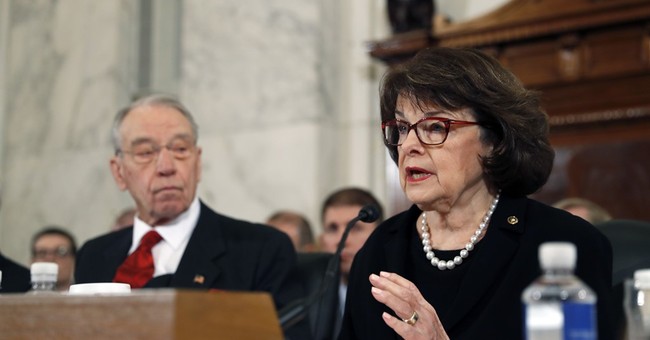 Well, this was expected: Senate Democrats on the Judiciary Committee have delayed a vote on Sen. Jeff Sessions’ attorney general nomination. Sen. Dianne Feinstein (D-CA) said that over 190 pages of answers to a questionnaire were submitted, and that her staff needs to review them. Sen. Chuck Grassley (R-IA), the chairman of the committee, noted that Feinstein’s request was within the rules of the committee and granted the request. The vote will be delayed by a week, according to the Hill. It’s the only thing Democrats can do to fight against Trump’s cabinet nominations, as the Reid Rule nuked the filibuster for presidential appointees, lowering the threshold for confirmation to a mere majority. The publication added that Sen. Joe Manchin (D-WV) would vote with Republicans to confirm Sessions, all but assuring his confirmation:

As we have done for most nominees ... I'm asking that the vote for Sen. Sessions be held over until next week," Sen. Dianne Feinstein (D-Calif.), the top Democrat on the Judiciary Committee, said Tuesday.

The Senate Judiciary Committee was scheduled to vote on the Alabama Republican's nomination during a Tuesday morning meeting. The committee's approval is a first step to being scheduled for a full Senate vote.

But under committee rules, any lawmaker can ask that a nomination be held over for a week if it's on the agenda for the first time.

Sen. Chuck Grassley (R-Iowa), the chairman of the committee, kicked off Tuesday's hearing by noting that Democrats wanted to delay the nomination, and said, "Of course, I'll honor that request," per the committee's rules.

Democrats were widely expected to delay the vote, though Feinstein declined to comment on Monday evening about her plans.

The delay is a way for Democrats to show their base that they’re doing something, but it’s ultimately just delaying the inevitable: the swearing in of Attorney General Jeff Sessions.