Well, Obama Has No Ideas On How To Save His Own Health Care Law...He Just Gave A Speech 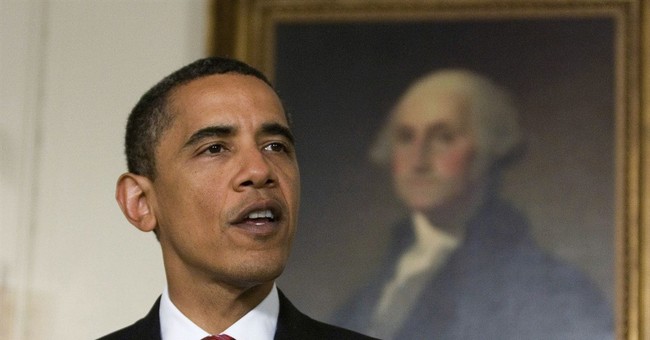 Well, before the New Year celebrations, President Obama said he was going to meet with Congressional Democrats at the outset of the new session to discuss how they can save his signature health care plan. You would think that there would be a pep talk, a saber-rattling cry to defend Obamacare at all costs, a Leonidas-like toughness that they will do everything they can to stop the Republicans. Politico reported, “They’re [Democrats] mobilizing grassroots support — and looking to inflict as much GOP pain as possible.”

Democrats don’t have the votes to stop Republicans from gutting Obamacare. So as they watch their signature domestic policy accomplishment about to be dismantled, they’re looking to the ground game that helped pass it seven years ago.

And they’re targeting moderate Republicans in Alaska, Arizona, Maine, Nevada and Tennessee who are up for reelection in 2018 — or who could be influential in the repeal vote — with a seven-figure television and print ad campaign. The message of the groups mounting the campaign, which include SEIU, Families USA, National Partnership for Women and Families and the Center for Medicare Advocacy, is that repealing the health law without a replacement is a reckless move that could put millions of Americans in harm’s way — the print ad shows someone standing at the edge of an unfinished bridge over open water.

The goal is to make a very big noise that might, possibly, sway a handful of GOP votes in the Senate — and if not, to delay the process for as long as possible and inflict as much political pain on the GOP as they can.

Well, at least Democrats have a few things cooking to help them save their party leader’s health care plan. As for Obama, well, he had no plan to save his own bill. It was just another speech, where the outgoing president said it was up to Democrats to save his legacy (via Washington Examiner):

President Obama gave a "nostalgic" speech about Obamacare to Democrats on Wednesday, but was light on specific strategies to save it, according to a Democrat in the meeting.

Obama met with House and Senate Democrats Wednesday to reminisce about the law, which Republicans have already started efforts to dismantle.

Rep. Louise Slaughter, D-N.Y., told reporters Obama gave a "very nostalgic" speech but said he would leave it up to them to map out a strategy to prevent Republicans from destroying the law. Slaughter also noted Democrats will be united in not working on any replacement.

Justin wrote that Sen. Joe Manchin (D-WV) declined to attend the meeting with President Obama today, saying, “If anyone listened and paid attention to what the American people said when they voted, they want this place to work. Can you imagine in here ... we have the outgoing president coming up here today to talk to only Democrats. We have the incoming vice president coming up to talk only to Republicans.” Manchin represents a deep-red state that broke overwhelmingly for Trump in the last election. He’s up for re-election in 2018, so I guess you could also say that he’s making maneuvers to save his job as well. Obama is one of the most unpopular figures polled in West Virginia and for good reason. Obama’s health care and anti-coal policies have decimated local communities.

The Washington Examiner added that blaming the GOP for any detrimental impact that may follow was emphasized and Katie added that they’re already coming out of the gate on that one with this slogan: Make America Sick Again.

So, the president just really wanted to give a speech about how awesome his law was and leave the heavy work to Congressional Democrats. I don’t think that’s going to last. For starters, Obama is going to stay in D.C. and he says he will keep a low profile, which is exactly the opposite of what he said after the election. At a meeting for Organizing for Action in November, Obama said, I’m going to be constrained in what I do with all of you until I am again a private citizen,” but that’s not so far off” (i.e. I’m going to head back into the trenches). Then again, what can you expect from a man who promised us if we liked our health care plans, we can keep them. I’d be hard pressed to think that he is just going to sit around while the GOP wipes away his legacy.