Obama: I’m Going To Maintain A Low Profile When I Leave The White House 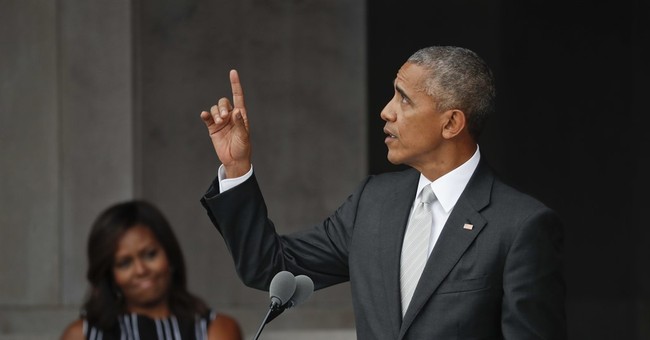 Well, sort of. First, we all know that’s not going to happen, given how this president has an unbridled penchant to lecture use about everything. Yet, on a podcast with his former adviser David Axelrod over Christmas, Obama said he was going to lie low, but not politically—he meant internally (via The Hill):

President Obama plans to keep a low-profile when he leaves office in January to better reflect on his time as president.

“I have to be quiet for a while. And I don’t mean politically, I mean internally. I have to still myself,” Obama said. “You have to get back in tune with your center and process what's happened before you make a bunch of good decisions.”

The president plans to stay in D.C. so his youngest daughter can finish high school. He’ll also write a book. Yet, in November, the president pretty much said that he was going to head back into the trenches to oppose Trump. At the time, the president was addressing an Organizing for Action meeting, where he said, “I’m going to be constrained in what I do with all of you until I am again a private citizen, but that’s not far off.”

Obama jumping back into the fray to oppose the new president would not be shocking. Given his actions prior to leaving office, like the permanent ban on offshore drilling, our refusal to veto a UN resolution condemning Israeli settlements, and the declaration of large swaths of land as national monuments to block new oil and gas exploration, he seems to be settling old score; something that GOP pollster Frank Luntz said yesterday. Luntz added that the president seems to be having a “FU tour” prior to his exit on January 20.

A Gaza Building Housing Media Outlets Was Destroyed by IDF. This is Why.
Katie Pavlich
The FBI Finally Admitted What We All Knew About the 2017 Attack on the GOP Congressional Baseball Team
Matt Vespa
Does Biden Hate the Police? You Have to Wonder with His Updated Proclamation
Rebecca Downs
Sheriff Ousted After Parkland Shooting is Now a Traffic Monitor
Landon Mion
Amazon to Contribute to $50k Reward for Information on Noose Found in Warehouse
Landon Mion
Of Course Trump Wants Credit for the Vaccines, He Deserves It!
Rebecca Downs
CARTOONS | AF Branco
View Cartoon
Most Popular