Uh Oh: Half Of Detroit's Ballots Might Be Disqualified Due To Errors 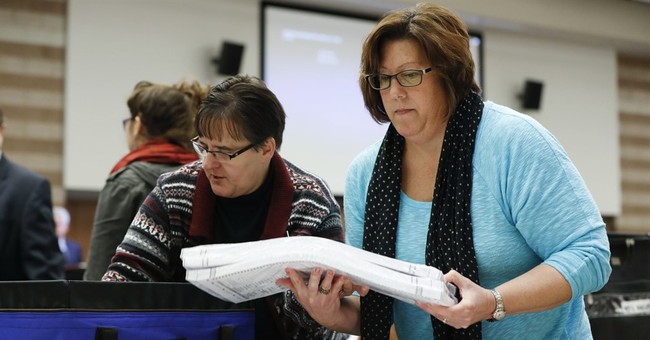 Yesterday Leah wrote that a Michigan judge ordered the recount challenge filed by Green Party candidate Jill Stein to move ahead, but it appears there are problems in the heavily Democratic Wayne County which encompasses Detroit. About half of the votes could be disqualified due to problems with the ballots. If things don’t match up, then these votes cannot be included in the recount (via Detroit News):

One-third of precincts in Wayne County could be disqualified from an unprecedented statewide recount of presidential election results because of problems with ballots.

Most of those are in heavily Democratic Detroit, where the number of ballots in precinct poll books did not match those of voting machine printout reports in 59 percent of precincts, 392 of 662.

According to state law, precincts whose poll books don’t match with ballots can’t be recounted. If that happens, original election results stand.

County reports obtained by The Detroit News, though, indicate canvassers were provided no explanation for why the numbers didn’t add up in those precincts. They certified the results of the election anyway.

In Detroit, 158 of the 392 precincts with ballot discrepancies had just one extra ballot accounted for either in the poll book or in the ballot box, according to the Wayne County’s canvassing report.

For suburban Wayne County, 72 percent of the 218 precincts boxes with discrepancies in the number of ballots were off by one ballot.

The other ballot discrepancies in Detroit and Wayne County precincts ranged between two and five ballots, according to the report.

This was one of the counties where Clinton underperformed—and it cost her. Trump won the state by a little over 10,000 votes (10,704 to be exact). In 2012, Obama won Wayne County 73/26 over Mitt Romney, garnering 595,253 votes. In 2016, Clinton won the county as well, but with a 66/26 margin over Donald Trump and only nabbing 517,842 votes. Simply put, this state was very winnable for Clinton, but she blew it due to ignoring the working class voters that dot the Great Lakes region. The Rust Belt had their revenge this year.

The results are not controversial, nor has any one who is serious questioned them. But Stein insists that Michigan, Pennsylvania, and Wisconsin may have been vulnerable to hacking even after the Department of Homeland Security said there was no spike in suspicious activity that would suggest the nation was under a cyber attack on election night. The Obama administration has said the results of November 8 reflect the will of the people—and even the Clinton campaign didn’t have any evidence to suggest hacking or fraud to put forward a recount challenge of their own. But now that Stein’s has initiated an effort on their own, they’re onboard.

The Green Party candidate has raised more money for this clown show than during her entire presidential run. In Pennsylvania, Stein hit some trouble, as her team blew the November 21 deadline for a voter-initiated recount. She would have to challenge the results in court, which she initially did, and present evidence of massive voter fraud or hacking, which she doesn’t have because there isn’t any. She recently withdrew her effort for a statewide recount in the Keystone State, but vowed to bring this matter before the federal courts.