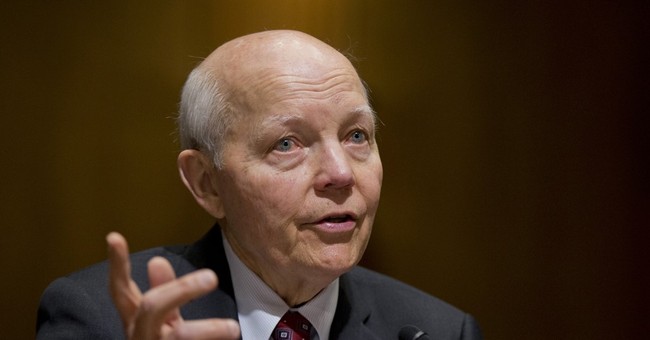 The conservative wing of the House Republican caucus tried to force a vote on impeachment for IRS Commissioner John Koskinen, which was derailed by a motion to refer the matter to the House Judiciary Committee for further review and debate.

Cortney wrote earlier this afternoon that the House Freedom Caucus chairman Rep. Jim Jordan (R-OH) had planned on putting forward a resolution to impeach Koskinen over his unwillingness to be forthcoming about the 2013 scandal, where the federal agency was reportedly targeting conservative groups seeking tax-exempt status. Susan Ferrechio of The Washington Examiner wrote that Jordan proposed the articles for impeachment; Rep. Nancy Pelosi (D-CA) tried to table the motion, but was shot down on a party line vote (180-235). Then, the House voted to approve a motion to send it back to committee (342-72), which killed the prospects of Koskinen being impeached since the House adjourns for the rest of the year next week:

Any new effort to impeach Koskinen would now require a new resolution in the new Congress that convenes next year.

The resolution against the embattle Koskinen cited "a pattern of conduct that is incompatible with his duties," including lawfully responding to congressional subpoenas into the targeting scandal, and not disclosing to Congress the destruction of thousands of emails related to the investigation.

Republican leaders were known to oppose the resolution since it could force the Senate to act on it, which might have blown up the GOP's agenda. Next year, Republicans will have the first chance in 15 years to advance legislation in a Congress and White House led by their party.

Koskinen's camp sighing big relief right now. His biggest drama of yr is over. Does Kosk serve out the rest of his IRS term under Trump?

That was, I must say, the smoothest Ive ever seen GOP leadership dispense w/ aFreedom Caucus matter. Easy-peasy.

So what do you think? DOES the @FREEDOMCAUCUS try again next year in the new Congress?

Speaking of Senate-House disagreements, Rachel Bade of Politico tweeted that the incoming chair of the Republican Study Committee, Rep. Mark Walker (R-AL), is supportive of impeachment proceedings against Koskinen. In the meantime, there’s also a debate as to whether President-elect Donald Trump gave the go ahead to put the resolution forward.

FOOD FIGHT in the House over what transition team did or did not tell @freedomcaucus on IRS ---> https://t.co/PbJC4OhnUf

.@freedomcaucus defender saying they did in fact check w/the Trump transition team to do IRS impeachment & got the okay. #Choose_ur_news https://t.co/mqtwAJ2bS3