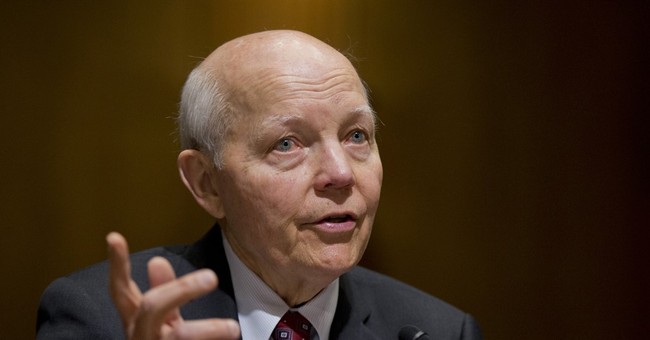 Update: The Tea Party Patriots have offered a statement of thanks to Rep. Jim Jordan for his impeachment efforts.

“Tea Party Patriots thanks Rep. Jim Jordan (R-OH) for his insistence on seeking the impeachment of IRS Commissioner John Koskinen for his role in covering up the unlawful targeting of conservative groups by IRS employees. Despite his promise to restore public trust in the IRS, Commissioner Koskinen further eroded Americans’ confidence in the agency when he lied to Congress under oath and allowed the destruction of key evidence. President Obama and his Administration have refused to hold Lois Lerner or anyone else accountable for targeting conservatives’ First Amendment right to free speech and we are thankful that Rep. Jordan is insisting the House vote on impeaching Commissioner Koskinen. It’s now up to House Republicans to do the right thing and vote to finally hold someone accountable for this scandal.”

"John Koskinen needs to be held accountable," Rep. Jim Jordan (R-Ohio) said on Tuesday. The representative has decided to introduce a resolution later today to impeach the IRS commissioner for his uncooperative role in the investigation into his agency's targeting of conservative groups.

Jordan's plan is to call up an impeachment resolution, which will require some form of action by the House within two days, setting up a vote before lawmakers leave for the rest of the year. If lawmakers challenged it — for example, by making a motion to table it — a vote would be held on that motion, and that vote would essentially become a proxy vote for impeachment.

Jordan is joined by other conservative lawmakers wanting to oust Koskinen, yet Democrats and even some Republicans don't believe the commissioner's actions warrant impeachment.

The IRS made life incredibly difficult for tea party groups seeking tax-exempt status a few years ago and faced little to no accountability for it. Officials like Lois Lerner resigned, yet she nor any other IRS leaders were faced with charges after a Justice Department probe.

Things did not improve under Koskinen. Three years after he took over as commissioner in December 2013, he has failed to provide documents requested by Congress as they investigate the tea party scandal. Most egregiously, according to Jordan, is the fact that thousands of relevant emails were deleted on Koskinen's watch.

“On his watch, 400 back-up tapes are destroyed,” Jordan told WND and Radio America. “He had the duty to preserve the documents with preservation orders put in place. He had a duty to produce them with two subpoenas asking for the documents."

Jordan also argues that Koskinen repeatedly misled Congress in his testimonies before the House Judiciary Committee.

Koskinen has made no indication he's going to retire before his term ends next November.