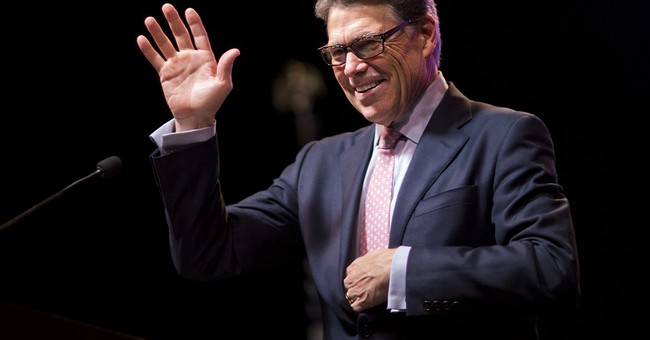 Former Republican Texas Gov. Rick Perry is reportedly being considered for Energy Secretary. The Hill reported this development, which is ironic since that’s the agency Perry wanted to gut should he be elected president, but forgot to name during that infamous “oops” 2011 debate gaffe. Yes, it was embarrassing. And it was another episode of the very slow, very painful, train wreck that was the 2012 Perry campaign.

Alongside Perry, Bill Hagerty, who is the head of a private-equity investment firm and a former chief economic development officer for Tennessee Gov. Bill Haslam, is being considered for U.S. Trade Representative.

Two sources familiar with the discussions told the Journal that Steven Mnuchin and Texas Rep. Jeb Hensarling are also being considered for the Treasury secretary.

Perry, who also was a Republican candidate for president in 2012, had a famous debate-stage gaffe when he forgot the Department of Energy's name.

During a presidential debate in 2011, Perry forgot the Energy Department as he tried to list the three agencies that he pledged to eliminate as president.

It’s also odd since Perry called Trump a cancer to conservatism, but later said that he would be open to serve as his vice president when it became apparent that the president-elect would get the 1,237 delegates needed to win the GOP nomination.