Reid Rages: We Elected ‘A Sexual Predator Who Lost The Popular Vote’ 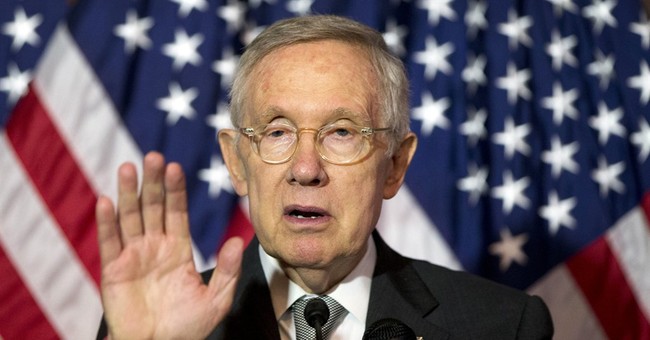 “I don’t really care [who wins the GOP nomination]. I think they’re all losers,” said outgoing Senate Minority Leader Harry Red (D-NV) in April of 2015. That was before President-elect Donald J. Trump came onto the scene and won a stunning upset victory over Hillary Clinton. Reid has become the source of ire and frustration for Republicans ever since he accused Mitt Romney (without evidence) of not paying his taxes. He has no regrets about it. He also went on a tirade against the Koch Brothers and Donald Trump. He said that Trump would never become president. He was wrong. And now he’s throwing another fit, again falsely accusing the president-elect of being a sexual predator (via The Hill):

"The election of Donald Trump has emboldened the forces of hate and bigotry in America," Reid said in a statement Friday. “White nationalists, Vladimir Putin and ISIS are celebrating Donald Trump’s victory, while innocent, law-abiding Americans are wracked with fear."

He added that if the president-elect "wants to roll back the tide of hate he unleashed, he has a tremendous amount of work to do and he must begin immediately.”

Reid's statement is a break with other top Democrats, who have offered a tentative olive branch to Trump to try to find common ground while pledging to stand up to him on areas they disagree.

This was sort of to be expected since he is leaving the Senate, but chalk this up as another instance of a graceless and increasingly grump Harry Reid, who, in the end, ended up being totally wrong about Trump. Also, Trump has been accused of sexual misconduct, he hasn’t been convicted of anything, so while speculation and rumor run rampant with these allegations—there’s no evidence that he’s the total monster the media made him out to be. Also, Trump was able to beat Clinton by flipping millions of Obama supporters from 2012. I don’t think these folks became white nationalists in four years. The post-2016 analysis that involve racial commentary are some of the most absurd pieces of writing at the end of this wild election. Clinton sucked, folks. Get over it—and as a result, she couldn’t hold the Obama coalition together. I think we'll all be glad when Reid is out of office.