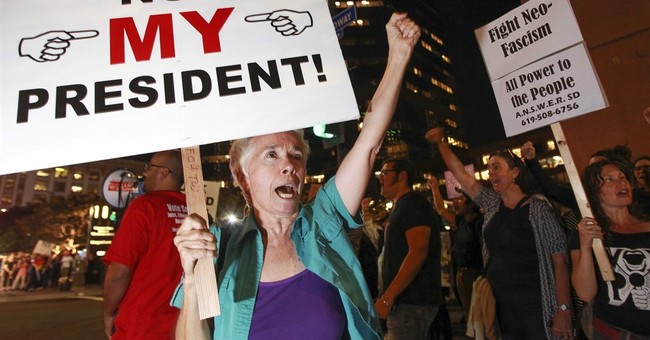 Californians are so shocked and appalled by the prospect of a Trump presidency that they’re going to try to secede from the union in 2018. I’m not kidding. President-elect Donald J. Trump’s shocking win over Hillary Clinton has sent scores of liberals throwing a temper tantrum, fearing for their lives. It’s the ultimate triggering, but also it’s not. This is politics. Sometimes you lose. Anyway, this cadre of Left Coast progressives is going to seek out signatures (via The Hill):

A group of California liberals, horrified at President-elect Donald Trump’s win on Tuesday, is taking the first steps toward what it hopes will be the next big secession movement.

The Yes California Independence Campaign hopes to place an initiative on California’s 2018 ballot that would call for a special election to decide whether the state should secede to form its own country.

“In our view, the United States of America represents so many things that conflict with Californian values, and our continued statehood means California will continue subsidizing the other states to our own detriment, and to the detriment of our children,” supporters write on their website. “In 2016, the United Kingdom voted to leave the international community with their ‘Brexit’ vote. Our ‘Calexit’ referendum is about California joining the international community.”

Yet, there could be some legal roadblocks (via NBC News):

But getting there will be extraordinarily hard. An 1869 Supreme Court ruling called Texas v. White suggests that there are only two ways for a state to leave the union: "through revolution or through consent of the States."

YesCalifornia rejects revolution. So independence could come only after a series of increasingly unlikely events — assuming the referendum gets on the 2019 ballot at all, something California voters will first have to decide in 2018.

All peaceful avenues to independence involve amending the U.S. Constitution — meaning the legislatures of two-thirds of the states would have to consent to letting the country's biggest state and its most powerful economic engine walk away.

Still, some pretty heavy hitters, especially in the tech-rich northern half of the state, are on board.

Well, by California leaving, they do give the GOP better chances at winning national elections since the largest guaranteed block of electoral votes for Democrats will be taken off the map. I don’t think this initiative will be successful—and Californians need to grow up, though I’m not too upset that a bunch of liberals want to break away. Regardless, this isn’t an apocalyptic event. It never was.