Kaine: You Know There's A Cabal Of Agents At The FBI Working To Screw Us Over To Elect Trump 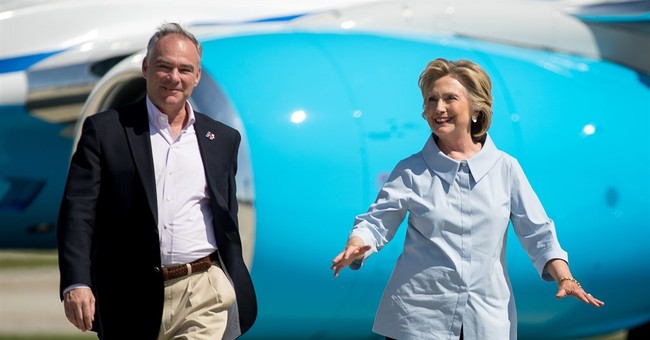 Democrats have gone from straight frothing at the mouth to straight up spewing conspiracy theories about the FBI. Democratic vice presidential candidate candidate Tim Kaine pretty much said that the FBI is out to get them, and leak information in order to elect Donald Trump (via CNN):

In an interview with Fusion's Alicia Menendez between Florida campaign stops, Kaine was asked about top Trump surrogate Rudy Giuliani, who suggested earlier this week he knew about the investigation before it was made public, comments the former New York City mayor distanced himself from Friday on CNN.

"I don't think Giuliani's walkback is credible," Clinton's running mate said. "I think the FBI, sadly, has become like a leaky sieve."

Kaine said Giuliani's initial comments signal that some within the FBI are "actively working" to help elect Trump through leaks to the media.

This notion that the FBI is in cahoots with the Trump campaign is nonsense. For starters, there’s no evidence. And if you’re going to use Rudy Giuliani’s less than subtle admission that he knew about FBI Director James Comey’s letter informing Congress that they found more Clinton-related emails from top aide Huma Abedin, and that they’re going to review them, as evidence—that’s beyond weak sauce. Giuliani says that his sources are not active agents and the palace intrigue about the tension from within the bureau is from retired agents. Heck, a former U.S. attorney made the claim that the FBI has an internal revolt on their hands over Comey’s decision not to indict Clinton over her email server. This was known publicly. Go over to Hot Air and read Ed’s post about how this charge that the FBI is leaking stuff to Trump surrogates to help his campaign is just plain nonsensical.

There’s already bad blood between the Justice Department and the FBI allegedly over the former’s lackadaisical demeanor towards the bureau’s probe into the Clinton Foundation; the FBI alleges that politically motivated roadblocks have been setup against them by DOJ. To pour more fuel on this fire, some House Democrats want the DOJ to investigate the FBI over these leaks.

We’ve entered the realm of conspiracy theories, folks. Oh, and if you weren’t already convinced that this theory of a Trump-FBI alliance was nutty, just check out former Clinton strategist James Carville insinuating that the KGB, the FBI, and House Republicans are conspiring to “hijack the election.” This is nutbar factor six—and it reeks of desperation given that the Clinton campaign seems to have realized that they can’t spin their way out of the former first lady’s email fiasco, the foundation, or the various Wikileaks dumps (whose authenticity hasn’t been questioned) that all undercut Clinton’s narrative against Trump as being unqualified. Who cares about unqualified when the alternative is someone who is ethically deficient?

Two days left until we vote. In the meantime, grab some popcorn and watch this interview from October 31.

Looming Government Shutdown Solely Democrats' Fault, According to 2018 Pelosi
Spencer Brown
Milley Details Nancy Pelosi's Attempt to Take Over the Chain-of-Command
Katie Pavlich
Poll Shows How Many Americans Would Have Children Under 12 Vaccinated Against COVID-19