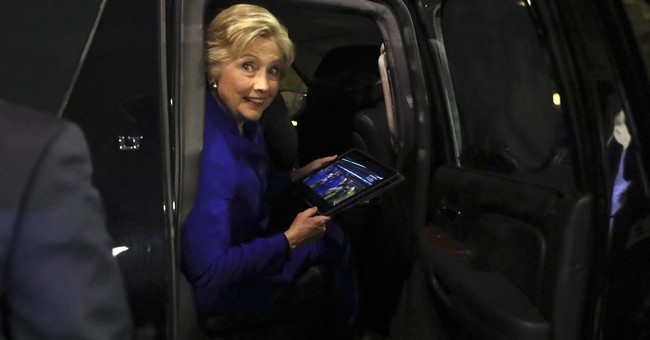 “There is a HJC oversight hearing today where the head of our Civil Division will testify. Likely to get questions on State Department emails. Another filing in the FOIA case went in last night or will go in this am that indicates it will be awhile (2016) before the State Department posts the emails,” he wrote.

Politico has more on this development, including the fact that Kadzik and Podesta are close friends. Kadzik served as Podesta’s lawyer when the Monica Lewinsky Scandal blew up, Podesta was then serving as Bill Clinton’s chief of staff:

It appears Kadzik was referencing a subcommittee hearing on “Ongoing Oversight: Monitoring the Activities of the Justice Department’s Civil, Tax and Environment and Natural Resources Divisions and the U.S. Trustee Program.” Four DOJ officials testified at the hearing, which was publicly announced.

The WikiLeaks revelation comes as Kadzik is in the middle of another flare-up over Clinton's email, after FBI Director James Comey Friday informed Congress of possible new developments in the case.

"We assure you that the Department will continue to work closely with the FBI and together, dedicate all necessary resource and take appropriate steps as expeditiously as possible," Kadzik wrote in letters to Congress on Monday.

Podesta and Kadzik have a longstanding relationship. During Bill Clinton's presidency, Kadzik provided legal representation to Podesta during the probe that ultimately led to revelations of Bill Clinton's affair with White House intern Monica Lewinski. In a separate hacked email published by WikiLeaks, Podesta said Kadzik "kept me out of jail."

Kadzik was also a lawyer to the late Marc Rich, who received a presidential pardon for various crimes, including wire fraud and tax evasion. Rich fled the country in the 1980s to avoid arrest, his companies eventually pleaded guilty to the charges paying tens of million of dollars in fines. Rich’s pardon from President Bill Clinton was highly controversial, even to this day as the late commodities trader’s wife was a Democratic heavyweight in the donor world and gave hundreds of thousands of dollars to what would become the Clinton Foundation and Hillary’s Senate campaign in New York.

Fox News’ Ed Henry noted that it could be that the hearing on this matter were publicized and well-known, but why would a heads up be sent on a private Gmail account, not his government account? The DOJ has faced years of scrutiny for being overly politicized, especially under the Eric holder era. They're now being accused of laying down political roadblocks to the FBI's investigation into the Clinton Foundation. This possible heads up between old pals on a rather serious matter, from a personal email address, will sure to add to the speculation that the DOJ is irreparably damaged due to their perceived pro-Clinton bias.

The world found out about Clinton’s private email server on March 2, 2015, when The New York Times broke the story. It’s plagued her campaign ever since.

DoJ's Peter Kadzik was also the attorney for Marc Rich--whose file the FBI released yesterday--as well as Podesta ("Kept me out of jail").