Are You Ready For...Secretary of State Joe Biden? 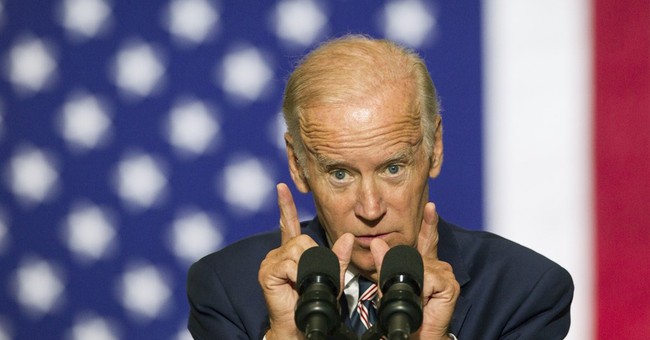 So, a bit of palace intrigue here. Hillary Clinton might be considering picking soon-to-be ex-Vice President Joe Biden for Secretary of State. Based solely on resume, Biden would be a top pick for any Democrat running this year to assume the post. At the same time, the two clashed over key areas of foreign policy. Politico reported that while Clinton and Biden had a good relationship, it entered choppy territory when there was speculation about him mounting another run for the presidency (via Politico):

Joe Biden is at the top of the internal short list Hillary Clinton’s transition team is preparing for her pick to be secretary of state, a source familiar with the planning tells POLITICO.

This would be the first major Cabinet candidate to go public for a campaign that’s insisted its focus remains on winning the election, and perhaps the most central choice for a potential president who was a secretary of state herself.

The vice president, who chaired the Senate Foreign Relations Committee before joining the administration, is one of the most experienced and respected Democrats on the world stage. He’s also coming to what would be the close of a 44-year career in Washington, first with six terms in the Senate and then two terms as President Barack Obama’s closest adviser — and the keeper of the portfolio on some of the most difficult international issues, including Iraq and Ukraine.

In Biden, Clinton would be tapping a seasoned hand on foreign policy, a glad-handing pol with a long memory and a well of deep relationships around the globe.

But she’d also be choosing someone with whom she repeatedly clashed as secretary of state, with the vice president often playing the skeptic while she supported more aggressive action. They differed over leaving troops in Iraq, the surge in Afghanistan, and whether to arm Syria’s rebels and bomb Libya — and Clinton took the more hawkish line in every case. During the Obama administration’s lengthy review of Afghanistan policy early in his tenure, for instance, a skeptical Biden urged the president not to escalate the war, while Clinton backed Gen. Stanley McChrystal’s request for 40,000 more troops.

At the same time, there’s a high chance that Clinton will nix Biden and pick a woman to be our top diplomat. She’s already said that 50 percent of her cabinet would be female should she win in November, a shameless play on identity politics that really didn’t fare well with Democrats in the primary, especially with young voters; they wanted Bernie Sanders. There are two top women right now who some say could take the job of helming the State Department. Samantha Power is our current Ambassador to the U.N., who landed in some hot water when he described Hillary as a “monster” during the 2008 primaries. National Security Adviser Susan Rice is another option, though she’s badly tainted over misleading remarks she made about the 2012 Benghazi attacks when she did the full Ginsburg on the Sunday morning talk show circuit; she pretty much blamed the video. That’s a massive fight with the Senate. With Power, besides the Clinton remark, she’s a humanitarian interventionist, a disastrous freeing policy view that will have us bombing every country in the world that violates human rights. It’s a dangerous theory. It’s a destabilizing one—and it’s one rife with danger concerning mission creep.

Also, with Rice, there might be beef. Aaron Blake noted in The Washington Post that Rice served in Bill Clinton’s administration and defected to the Obama camp in 2008, where she slammed Clinton for her Iran and Iraq positions. Former Under Secretary of Defense for Policy, Michele Flourney, could be a candidate, though she might be our first female secretary of defense. Yet, back to Biden, it seems like a cut and dry pick that avoids old scores and mean girls drama. That is if the former vice president decides he wants to stay in public life. He has indicated, as many before him entering retirement, of wanting to write a book.