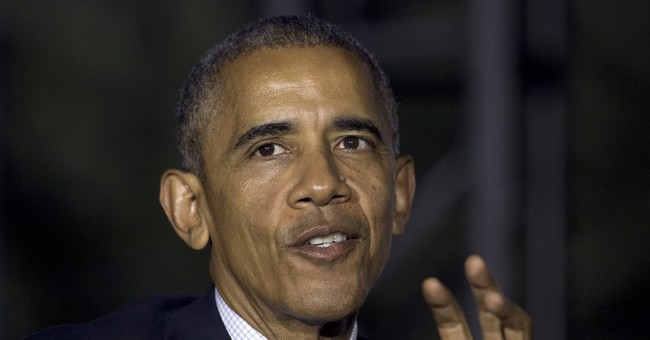 Jason Kander may have had an impressive ad when he assembled as AR-15 rifle blindfolded, while pushing back against incumbent Republican Roy Blunt’s attacks on his record on gun rights. Don’t get me wrong; it’s certainly one of the more effective gun ads featuring Democrats in recent memory until you realize that the rifle is already three-fourths assembled, Kander supports gutting due process concerning background checks (i.e. support for no-fly, no buy), and the whole notion that the Democratic Party is vehemently anti-gun. It was a worthy pivot.

On the economic front, Americans for Prosperity is reminding voters in the Show Me State that Kander is wrong for their checkbooks. Let’s start with the easiest target: Obamacare. The law is simply unworkable and falling apart. Recently, New Jersey’s Obamacare co-op collapsed, leaving just six of the original 23 left running. The whole system could be on the brink of total collapse.

On a side note, both Blunt and Kander have put forward their own plans last month to address the issue of affordable health insurance, which has become one of the most heated issues in this senate race (via Springfield News-Leader):

Blunt said last week he supports the replacement package unveiled in June by House Republicans. That plan would:

Kander says Obamacare needs to be fixed, not nixed. He supports:

AFP released an ad reminding Missourians that they are paying $2,000 more for Obamacare plans, but there’s also another issue that isn’t getting the attention that is needed this cycle; one that will have more of an immediate impact than Obamacare for American families. It’s energy. Last month, states were mandated to turn over preliminary blueprints for how they will comply with the standards set by President Obama’s Clean Power Plan. That agenda outlines a rather ambitious goal of reducing, by 2030, American carbon emissions by nearly 30 percent from 2005 levels. That’s economic death for most of the country. For coal, an estimated 125,800 jobs could be cut, with a further $650 billion in lost economic activity over the next ten years. Is that smart policy? It also doesn’t help that these new regulations pretty much screw over rural America. Most of the states that voted for Romney in 2012 will be disproportionately impacted by this law, including the nation’s most vulnerable: fixed-income seniors. They’re home budgets are set to be torpedoed by the rising energy costs.

AFP's state chapter released a  flyer outlining the butcher’s bill for the state’s adherence to this energy agenda: a 34 percent increase in electricity costs, a $1,870 increase for a family of four’s energy bill, and $3.3 billion to be spent to build new power plants that accommodate the Clean Power Plan. How unpopular is this proposal? Well, Missouri’s Democratic Attorney General Chris Koster, who’s also running for governor this year, joined Republican state attorney generals in a lawsuit to block the new regulations. Over half the states in the country have lined up to fight this job-killing agenda emanating from Obama’s Environmental Protection Agency.

As for African-Americans and Hispanics living under the Clean Power Plan rules, National Black Chamber of Commerce estimated that 7 million black jobs and 12 million Hispanic jobs would be lost by 2035 due to the regulations.

AFP-MO is on the ground informing voters of the issues that will light up their wallets, warning them that Jason Kander is not your friend. So far, AFP-MO reached at least one million Missouri residents with its mailing campaign, along with neighborhood canvassing, linking Kander to the president. State director Jeremy Cady is happy to reach that benchmark, though he noted the work to promote economic freedom this cycle isn’t over.

“It is the willingness of AFP-MO volunteers to connect with voters on a personal level – to hear their stories and learn of their struggles – that ensures our message is both effective and influential in the Show-Me state,” he said in a press release. “Contacting over one million voters is a great milestone, but it’s not where we’re stopping. We’ll continue to work around the clock to ensure Jason Kander is stopped from forcing Missouri families to pay more for his costly policies.”

We’re 32 days away from Election Day. This is the final push. And on the Obamacare front, AFP-MO might have received an indirect push from former President Bill Clinton.

Kander doesn’t support expanding Obamacare, and he’s not in favor of the public option provision the Clintons are pushing that allowed 55-year-olds to buy into Medicare and Medicaid at an affordable rate—whatever that may entail. Additionally, Bill called Obamacare “the craziest thing in the world,” which seems to be at odds at what his wife has said on the campaign trail about Obama’s health care reform. Even Bill Clinton thinks Obamacare sucks—now that’s something that could tie Kander into knots over a law that around 70 percent of Missourians oppose.