Big League: Debates Will Be 'Major Influence' For One-Third Of Voters 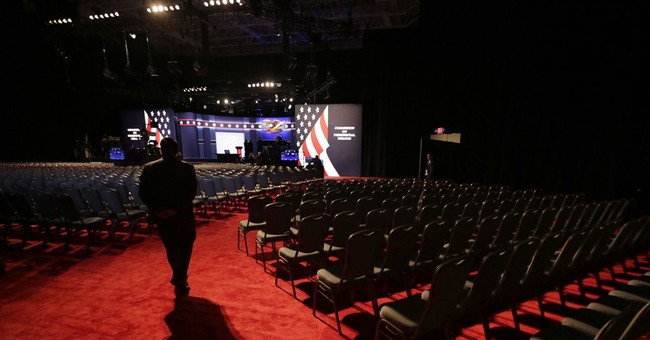 For a third of registered voters, the three debates between Donald Trump and Hillary Clinton will be important factors when it comes to their decision of who to vote for this November. The race is statistically a dead heat, though some polls in Florida, Ohio, and North Carolina show Clinton ahead (though it’s a safe bet that the polls will remain within the margin of error from here on out). These debates could be one of the last opportunities for Clinton and Trump to get a significant edge on one another. For young voters, these debates are especially significant, as some might be giving Clinton a second look (via WSJ):

A new Wall Street Journal/NBC News poll found that 34% of registered voters think the three presidential debates would be extremely or quite important in helping them decide whom to support for president. About 11% of voters are considered “debate persuadables”—that is, they think the debates are important and are either third-party voters or only loosely committed to either major-party candidate.

Slightly more Republicans than Democrats said the debates would be important to them, 37% to 31%. But voter groups that seem poised to pay the most attention include several that Mrs. Clinton is counting on to win. Some 49% of Hispanics, 42% of African-Americans and 39% of voters under age 35 say that the debates will be extremely or quite important to them.

As the candidates take the stage, the final vestiges of the electorate are deciding. As we’ve said here before, a lot is on the line tonight for both Trump and Clinton.