No, Those North Dakota Pipeline Protestors Attacked By Security Dogs Aren't The Victims 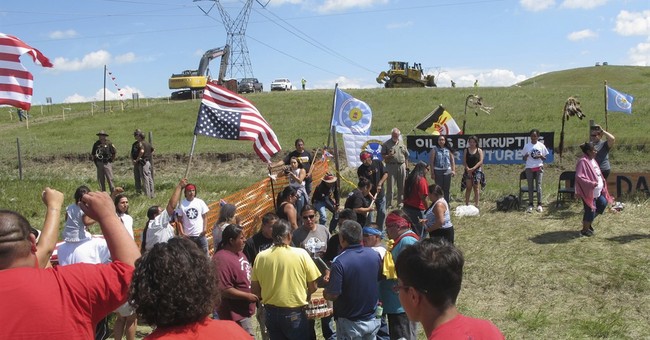 The battle over a 1,200-mile, $3.8 billion pipeline project in North Dakota is getting ugly. On September 5, AJ+, a subsidiary of Al-Jazeera, released this video showing pipeline security unleashing dogs on protestors, while saying that sacred burial grounds have been destroyed, according to tribal officials. The Standing Rock Sioux Tribe fears that the project will also impact their water supply.

So, dogs were unleashed on these protestors. Good—because they weren’t protesting at all. They were violent agitators, who ventured onto private property armed with wooden posts and flagpoles to start trouble. Rob Port, a North Dakota-based blogger, posted on his site that these protestors were throwing rocks at security and hitting the dogs with sticks:

Only the video – much of it gathered by the protesters themselves – shows something very different. For instance, this clip which shows a couple of interesting things.

This second video is a longer clip which overlaps the first one but also goes a bit further, showing the protesters throwing rocks and chasing the security personnel back to their trucks

Again, the narrative from the protesters is that they are the victims. They claim they were peacefully protesting when they were gassed by security guards and attacked by dogs. The most prominent media headlines seem to help with this narrative, focusing on the use of dogs and mace against the protesters and not the context in which those security tools were deployed.

As for the alleged destruction of burial sites, there was an allegation that human remains were unearthed during the construction of this pipeline. That turned out to be an unfounded claim. There’s also the claim that Dakota Access LLC, the energy company building the pipeline, never consulted with local tribes. That’s false; 389 such consultations were conducted between these tribes and the U.S. Army Corps Of Engineers who issued the permit for the pipeline. It’s also built on private land, and there are archeological experts on site just in case construction runs into a sacred site.

On the legal front, the Rock Souix Tribe filed a federal lawsuit, which ended in a partial win today. Parts of the pipeline’s construction has been ordered by a federal judge to be shut down (via ABC News):

An American Indian tribe succeeded Tuesday in getting a federal judge to temporarily stop construction on some, but not all, of a $3.8 billion four-state oil pipeline, but its broader request still hangs in the balance.

U.S. District Judge James Boasberg said Tuesday that work will temporarily stop between North Dakota's State Highway 1806 and 20 miles east of Lake Oahe, but will continue west of the highway because he believes the U.S. Army Corps of Engineers lacks jurisdiction on private land.

He also said he will rule by the end of Friday on the Standing Rock Sioux Tribe's challenge of federal regulators' decision to grant permits to the Dallas, Texas-based operators of the Dakota Access Pipeline, which will cross North Dakota, South Dakota, Iowa and Illinois.

In the meantime, acts of vandalism continue to occur near the construction site, where Green Party candidate Jill Stein recently vandalized a bulldozer. She’s been charged for the incident. At the same time, opponents of the pipeline feel that this isn’t the right course of action:

"I believe in openly opposing something. If you are against it openly oppose it, even if you get involved in an act of civil disobedience," said Holdefer.

The fire damage was reported to the equipment near Newton and two other locations. Opponents of the pipeline don't the incidents will hurt their effort to stop the pipeline

"I don't think anybody judges the thousands of us who have protested this in a very peaceable, very logical way based on the actions of one or two people.

Adam Mason with Iowa Citizens for Community Improvement agrees with Holdefer. He said there is no place for vandalism in their movement.

In August, Julie Fedorchak, chairwoman of the North Dakota Public Service Commission, said she hoped that cooler heads would prevail when defending approving the permit for the pipeline, according to the Bismarck Tribune.