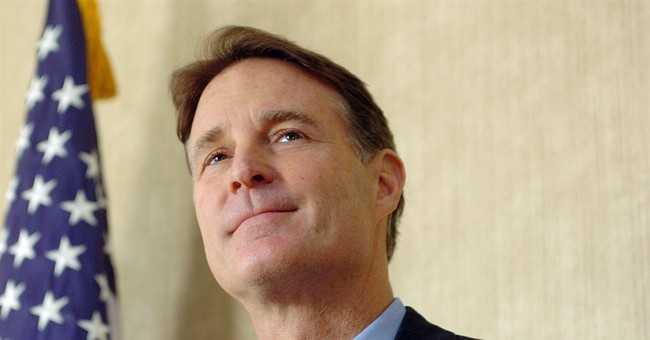 Former Indiana Democratic Sen. Evan Bayh is trying to give public life another go, but Americans For Prosperity is going to do all that they can to make sure that doesn’t happen. In a play on words, they’re now criss-crossing the Hoosier State telling voters to not Bayh their former senator’s liberal agenda.

Townhall was able to ask J. Lexi Cory, AFP’s Regional Communications Manager, about the campaign. So far, they’ve knocked on 23,000 doors and spoke with 180,000 activists, though there is no firm number goal in terms of outreach–it’s to reach as many voters as they can before November 8.

“We plan to continue this outreach, and all of our resources will be directed to moving these efforts forward and reaching many voters as possible to speak with them on the harm Evan Bayh’s choices has caused to Hoosiers,” she said.

Concerning targeting, one would think to focus on the areas that decide elections in Indiana, but Cory added that “The tour stops will continue all across the state of Indiana, hitting as many towns as possible. We’ve got six towns on the schedule for next week, and we’ll be continuing in the weeks leading up to the election.”

The two issues that AFP-Indiana plans to hit Bayh are Obamacare and the looming Clean Power Plan regulations. Blueprints for how states will comply with the new emissions standards set by the EPA are due in September 6, 2016, with a final drafted plan to be submitted no later than September 6, 2018. It’s one of the most underreported regulatory nightmares to come out of this administration. It’s set to mostly impact states that voted for Romney; torpedo the home budgets of fixed-income seniors; and disproportionately affect those in rural areas. Even Democratic state attorneys general have joined the legal battles against it. More than half the states in the country oppose the new rules that will cut carbon dioxide emissions by nearly 30 percent by 2030 from 2005 levels. For a coal-producing state, like Indiana, that’s an economic death sentence. Luckily, the Supreme Court issued a stay on the carbon emissions regulation in February; an indication that they feel the new regulations would cause “imminent and irreparable harm.”

On Obamacare, Cory said that it cost 100,000 Indiana residents’ health care plans to be cancelled.

“The CPP regulations are also an important issue, because Indiana is one of the top coal-producing states in the nation, and these regulations threaten thousands of Hoosier jobs and could cause their utility bills to skyrocket. We think it’s important that voters are aware Bayh is supportive of these policies,” she added. In fact, most Americans believe that Obama’s climate agenda will lead to a spike in their energy bills.

Besides Obamacare, Bayh’s actions after the bank bailout are something that has left a bad taste in the mouths of many Indiana voters. Bayh decided to leave the Senate in 2010 and took a position with a bank that got billions in bailout money, which he voted for, that allowed him to rake in almost a million dollars. This point was highlighted in an ad for Freedom Partners Action Fund, which is part of Charles And David Koch’s network of groups and political organizations that promote economic freedom.

Like in the ad, Cory said that there’s a feeling that Hoosiers felt left behind by Bayh. When asked what issue resonated the most during this tour, she said, “People are upset that he left Indiana to work with policies that are directly impacting them in a negative way, such as Obamacare issues and the bank bailouts, and then was paid a nice salary to work on those issues. We’ve found that this disregard for the wellbeing of Hoosiers is something that doesn’t sit well with them, and we’re working to make sure they hold him accountable for those actions.”

So, what about the revelation that Bayh is now on the inactive list within the state’s voter roll? Oh, and the state cannot confirm that he actually lives in Indianapolis. CNN reported that this voter classification won’t prevent Bayh from casting a ballot for himself come November, but it’s the first step in having your name purged from the voter rolls. Cory said that AFP is going to remain focused on the issues, though “his inactive voter status is certainly indicative of how out of touch Evan Bayh is with Hoosiers and Indiana.”

AFP-Indiana recently released an ad of their own hitting Bayh's record, which you can watch here.  Bayh currently leads in the senate race by seven points.